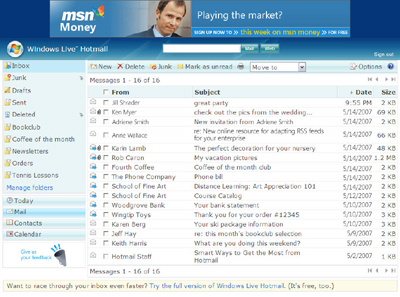 Microsoft engineers began working on Windows Live around 2001, as company leaders began pushing for innovations that would give the company more flexibility and long-term advantages [source: CNET News]. Leaders wanted an Internet-based, all-encompassing suite of programs that they could quickly modify and improve through live updates. The move was a dramatic shift for the company, which traditionally focused on prepackaged software and operating systems.

Microsoft founder and chairman Bill Gates first talked about the Windows Live effort in the fall 2005, announcing the company was entering a new era that would change the face of Web use. The company aimed for both personal and small business users. On May 6, 2007, the company officially announced Windows Live Hotmail would replace MSN Hotmail in a global launch available in 36 languages.

The first version of the Windows Live effort took many existing products such as Hotmail and Messenger and repackaged and branded them. Since the Windows Live launch, however, the company has continued adding new products and updates to the suite.

The service helps the company better understand how customers use its products and the Web in general, allowing it to stay ahead of demand as competition grows. Company officials said in the same article that their goal is continuously updating products and launching new ones to meet the evolving demands of Web users. Many of the products are aimed at the general public that's familiar with basic software programs. Another portion, however, is aimed at the more computer-savvy user and even encourages them to explore innovative ways to further evolve the Windows Live package.

Although the Internet-based services in Windows Live are free, the system includes higher levels of function that are available for a subscription price. The approach also provides advertising opportunities that potentially provide revenue for the company. Typically, the lowest level of service is available free of charge and supported by advertisements while the better versions are subscription-based.

On the next page, we'll talk about some of the unique features found in the Windows Live e-mail application.