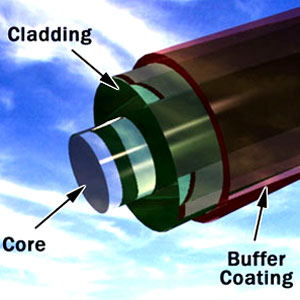 You hear about fiber-optic cables whenever people talk about the telephone system, the cable TV system or the Internet. Fiber-optic lines are strands of optically pure glass as thin as a human hair that carry digital information over long distances. They are also used in medical imaging and mechanical engineering inspection.

In this article, we will show you how these tiny strands of glass transmit light and the fascinating way that these strands are made.

What are Fiber Optics?

Fiber optics (optical fibers) are long, thin strands of very pure glass about the diameter of a human hair. They are arranged in bundles called optical cables and used to transmit light signals over long distances.

If you look closely at a single optical fiber, you will see that it has the following parts:

Hundreds or thousands of these optical fibers are arranged in bundles in optical cables. The bundles are protected by the cable's outer covering, called a jacket.

Some optical fibers can be made from plastic. These fibers have a large core (0.04 inches or 1 mm diameter) and transmit visible red light (wavelength = 650 nm) from LEDs.

Let's look at how an optical fiber works.

How Does an Optical Fiber Transmit Light?

Diagram of total internal reflection in an optical fiber

Suppose you want to shine a flashlight beam down a long, straight hallway. Just point the beam straight down the hallway -- light travels in straight lines, so it is no problem. What if the hallway has a bend in it? You could place a mirror at the bend to reflect the light beam around the corner. What if the hallway is very winding with multiple bends? You might line the walls with mirrors and angle the beam so that it bounces from side-to-side all along the hallway. This is exactly what happens in an optical fiber.

The light in a fiber-optic cable travels through the core (hallway) by constantly bouncing from the cladding (mirror-lined walls), a principle called total internal reflection. Because the cladding does not absorb any light from the core, the light wave can travel great distances.

However, some of the light signal degrades within the fiber, mostly due to impurities in the glass. The extent that the signal degrades depends on the purity of the glass and the wavelength of the transmitted light (for example, 850 nm = 60 to 75 percent/km; 1,300 nm = 50 to 60 percent/km; 1,550 nm is greater than 50 percent/km). Some premium optical fibers show much less signal degradation -- less than 10 percent/km at 1,550 nm.

To understand how optical fibers are used in communications systems, let's look at an example from a World War II movie or documentary where two naval ships in a fleet need to communicate with each other while maintaining radio silence or on stormy seas. One ship pulls up alongside the other. The captain of one ship sends a message to a sailor on deck. The sailor translates the message into Morse code (dots and dashes) and uses a signal light (floodlight with a venetian blind type shutter on it) to send the message to the other ship. A sailor on the deck of the other ship sees the Morse code message, decodes it into English and sends the message up to the captain.

Now, imagine doing this when the ships are on either side of the ocean separated by thousands of miles and you have a fiber-optic communication system in place between the two ships. Fiber-optic relay systems consist of the following:

The transmitter is like the sailor on the deck of the sending ship. It receives and directs the optical device to turn the light "on" and "off" in the correct sequence, thereby generating a light signal.

The transmitter is physically close to the optical fiber and may even have a lens to focus the light into the fiber. Lasers have more power than LEDs, but vary more with changes in temperature and are more expensive. The most common wavelengths of light signals are 850 nm, 1,300 nm, and 1,550 nm (infrared, non-visible portions of the spectrum).

As mentioned above, some signal loss occurs when the light is transmitted through the fiber, especially over long distances (more than a half mile, or about 1 km) such as with undersea cables. Therefore, one or more optical regenerators is spliced along the cable to boost the degraded light signals.

An optical regenerator consists of optical fibers with a special coating (doping). The doped portion is "pumped" with a laser. When the degraded signal comes into the doped coating, the energy from the laser allows the doped molecules to become lasers themselves. The doped molecules then emit a new, stronger light signal with the same characteristics as the incoming weak light signal. Basically, the regenerator is a laser amplifier for the incoming signal.

The optical receiver is like the sailor on the deck of the receiving ship. It takes the incoming digital light signals, decodes them and sends the electrical signal to the other user's computer, TV or telephone (receiving ship's captain). The receiver uses a photocell or photodiode to detect the light.

Less expensive - Several miles of optical cable can be made cheaper than equivalent lengths of copper wire. This saves your provider (cable TV, Internet) and you money. Thinner - Optical fibers can be drawn to smaller diameters than copper wire. Higher carrying capacity - Because optical fibers are thinner than copper wires, more fibers can be bundled into a given-diameter cable than copper wires. This allows more phone lines to go over the same cable or more channels to come through the cable into your cable TV box. Less signal degradation - The loss of signal in optical fiber is less than in copper wire. Light signals - Unlike electrical signals in copper wires, light signals from one fiber do not interfere with those of other fibers in the same cable. This means clearer phone conversations or TV reception. Low power - Because signals in optical fibers degrade less, lower-power transmitters can be used instead of the high-voltage electrical transmitters needed for copper wires. Again, this saves your provider and you money. Digital signals - Optical fibers are ideally suited for carrying digital information, which is especially useful in computer networks. Non-flammable - Because no electricity is passed through optical fibers, there is no fire hazard. Lightweight - An optical cable weighs less than a comparable copper wire cable. Fiber-optic cables take up less space in the ground. Flexible - Because fiber optics are so flexible and can transmit and receive light, they are used in many flexible digital cameras for the following purposes:

Because of these advantages, you see fiber optics in many industries, most notably telecommunications and computer networks. For example, if you telephone Europe from the United States (or vice versa) and the signal is bounced off a communications satellite, you often hear an echo on the line. But with transatlantic fiber-optic cables, you have a direct connection with no echoes.

How Are Optical Fibers Made? 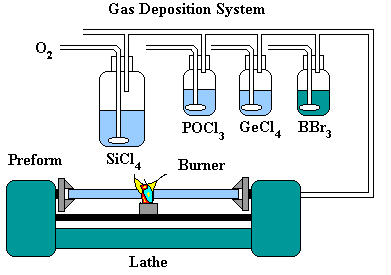 Now that we know how fiber-optic systems work and why they are useful -- how do they make them? Optical fibers are made of extremely pure optical glass. We think of a glass window as transparent, but the thicker the glass gets, the less transparent it becomes due to impurities in the glass. However, the glass in an optical fiber has far fewer impurities than window-pane glass. One company's description of the quality of glass is as follows: If you were on top of an ocean that is miles of solid core optical fiber glass, you could see the bottom clearly.

The glass for the preform is made by a process called modified chemical vapor deposition (MCVD).

In MCVD, oxygen is bubbled through solutions of silicon chloride (SiCl4), germanium chloride (GeCl4) and/or other chemicals. The precise mixture governs the various physical and optical properties (index of refraction, coefficient of expansion, melting point, etc.). The gas vapors are then conducted to the inside of a synthetic silica or quartz tube (cladding) in a special lathe. As the lathe turns, a torch is moved up and down the outside of the tube. The extreme heat from the torch causes two things to happen:

The lathe turns continuously to make an even coating and consistent blank. The purity of the glass is maintained by using corrosion-resistant plastic in the gas delivery system (valve blocks, pipes, seals) and by precisely controlling the flow and composition of the mixture. The process of making the preform blank is highly automated and takes several hours. After the preform blank cools, it is tested for quality control (index of refraction).

Drawing Fibers from the Preform Blank

Once the preform blank has been tested, it gets loaded into a fiber drawing tower.

The blank gets lowered into a graphite furnace (3,452 to 3,992 degrees Fahrenheit or 1,900 to 2,200 degrees Celsius) and the tip gets melted until a molten glob falls down by gravity. As it drops, it cools and forms a thread.

The operator threads the strand through a series of coating cups (buffer coatings) and ultraviolet light curing ovens onto a tractor-controlled spool. The tractor mechanism slowly pulls the fiber from the heated preform blank and is precisely controlled by using a laser micrometer to measure the diameter of the fiber and feed the information back to the tractor mechanism. Fibers are pulled from the blank at a rate of 33 to 66 ft/s (10 to 20 m/s) and the finished product is wound onto the spool. It is not uncommon for spools to contain more than 1.4 miles (2.2 km) of optical fiber.

The finished optical fiber is tested for the following:

­Once t­he fibers have passed the quality control, they are sold to telephone companies, cable companies and network providers. Many companies are currently replacing their old copper-wire-based systems with new fiber-optic-based systems to improve speed, capacity and clarity.

Because the cladding does not absorb any light from the core, the light wave can travel great distances. However, some of the light signal degrades within the fiber, mostly due to impurities in the glass. The extent that the signal degrades depends upon the purity of the glass and the wavelength of the transmitted light (for example, 850 nm = 60 to 75 percent/km; 1,300 nm = 50 to 60 percent/km; 1,550 nm is greater than 50 percent/km). Some premium optical fibers show much less signal degradation -- less than 10 percent/km at 1,550 nm.

For more information on fiber optics and related topics, check out the links on the next page.