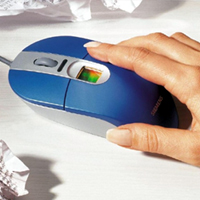 Computerized fingerprint scanners have been a mainstay of spy thrillers for decades, but up until recently, they were pretty exotic technology in the real world. In the past few years, however, scanners have started popping up all over the place -- in police stations, high-security buildings and even on PC keyboards. You can pick up a personal USB fingerprint scanner for less than $100, and just like that, your computer's guarded by high-tech biometrics. Instead of, or in addition to, a password, you need your distinctive print to gain access.

In this article, we'll examine the secrets behind this exciting development in law enforcement and identity security. We'll also see how fingerprint scanner security systems stack up to conventional password and identity card systems, and find out how they can fail. 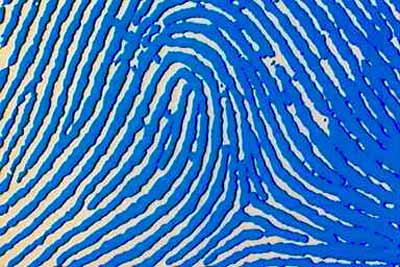 Like optical scanners, capacitive fingerprint scanners generate an image of the ridges and valleys that make up a fingerprint. But instead of sensing the print using light, the capacitors use electrical current.

The diagram below shows a simple capacitive sensor. The sensor is made up of one or more semiconductor chips containing an array of tiny cells. Each cell includes two conductor plates, covered with an insulating layer. The cells are tiny -- smaller than the width of one ridge on a finger.

The sensor is connected to an integrator, an electrical circuit built around an inverting operational amplifier. The inverting amplifier is a complex semiconductor device, made up of a number of transistors, resistors and capacitors. The details of its operation would fill an entire article by itself, but here we can get a general sense of what it does in a capacitance scanner. (Check out this page on operational amplifiers for a technical overview.)

As you may have recognized, the two conductor plates form a basic capacitor, an electrical component that can store up charge (see How Capacitors Work for details). The surface of the finger acts as a third capacitor plate, separated by the insulating layers in the cell structure and, in the case of the fingerprint valleys, a pocket of air. Varying the distance between the capacitor plates (by moving the finger closer or farther away from the conducting plates) changes the total capacitance (ability to store charge) of the capacitor. Because of this quality, the capacitor in a cell under a ridge will have a greater capacitance than the capacitor in a cell under a valley.

To scan the finger, the processor first closes the reset switch for each cell, which shorts each amplifier's input and output to "balance" the integrator circuit. When the switch is opened again, and the processor applies a fixed charge to the integrator circuit, the capacitors charge up. The capacitance of the feedback loop's capacitor affects the voltage at the amplifier's input, which affects the amplifier's output. Since the distance to the finger alters capacitance, a finger ridge will result in a different voltage output than a finger valley.

The scanner processor reads this voltage output and determines whether it is characteristic of a ridge or a valley. By reading every cell in the sensor array, the processor can put together an overall picture of the fingerprint, similar to the image captured by an optical scanner.

The main advantage of a capacitive scanner is that it requires a real fingerprint-type shape, rather than the pattern of light and dark that makes up the visual impression of a fingerprint. This makes the system harder to trick. Additionally, since they use a semiconductor chip rather than a CCD unit, capacitive scanners tend to be more compact that optical devices.

For much more information about fingerprint scanners and other biometric technologies, check out the links on the next page.