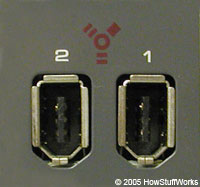 FireWire is a method of transferring information between digital devices, especially audio and video equipment. Also known as IEEE 1394, FireWire is fast -- the latest version achieves speeds up to 800 Mbps. At some time in the future, that number is expected to jump to an unbelievable 3.2 Gbps when manufacturers overhaul the current FireWire cables.

You can connect up to 63 devices to a FireWire bus. Windows operating systems (98 and later) and Mac OS (8.6 and later) both support it.

Let's say you have your digital camcorder connected to your home computer. When your computer powers up, it queries all of the devices connected to the bus and assigns each one an address, a process called enumeration. FireWire is plug-and-play, so if you connect a new FireWire device to your computer, the operating system auto-detects it and asks for the driver disc. If you've already installed the device, the computer activates it and starts talking to it. FireWire devices are hot pluggable, which means they can be connected and disconnected at any time, even with the power on.