If you have spent any time at all working with a computer, then chances are good that you have used a floppy disk at some point. The floppy disk drive (FDD) was the primary means of adding data to a computer until the CD-ROM drive became popular. In fact, FDDs have been a key component of most personal computers for more than 20 years.

Basically, a floppy disk drive reads and writes data to a small, circular piece of metal-coated plastic similar to audio cassette tape. In this article, you will learn more about what is inside a floppy disk drive and how it works. You will also find out some cool facts about FDDs.

History of the Floppy Disk Drive

The floppy disk drive (FDD) was invented at IBM by Alan Shugart in 1967. The first floppy drives used an 8-inch disk (later called a "diskette" as it got smaller), which evolved into the 5.25-inch disk that was used on the first IBM Personal Computer in August 1981. The 5.25-inch disk held 360 kilobytes compared to the 1.44 megabyte capacity of today's 3.5-inch diskette.

The 5.25-inch disks were dubbed "floppy" because the diskette packaging was a very flexible plastic envelope, unlike the rigid case used to hold today's 3.5-inch diskettes.

By the mid-1980s, the improved designs of the read/write heads, along with improvements in the magnetic recording media, led to the less-flexible, 3.5-inch, 1.44-megabyte (MB) capacity FDD in use today. For a few years, computers had both FDD sizes (3.5-inch and 5.25-inch). But by the mid-1990s, the 5.25-inch version had fallen out of popularity, partly because the diskette's recording surface could easily become contaminated by fingerprints through the open access area.

Parts of a Floppy Disk Drive 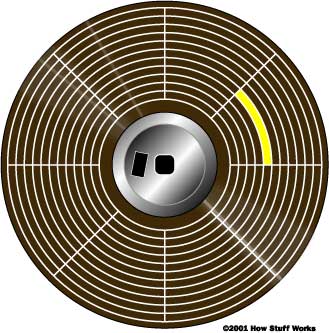 A floppy disk is a lot like a cassette tape:

If you have ever used an audio cassette, you know that it has one big disadvantage -- it is a sequential device. The tape has a beginning and an end, and to move the tape to another song later in the sequence of songs on the tape you have to use the fast forward and rewind buttons to find the start of the song, since the tape heads are stationary. For a long audio cassette tape it can take a minute or two to rewind the whole tape, making it hard to find a song in the middle of the tape.

A floppy disk, like a cassette tape, is made from a thin piece of plastic coated with a magnetic material on both sides. However, it is shaped like a disk rather than a long thin ribbon. The tracks are arranged in concentric rings so that the software can jump from "file 1" to "file 19" without having to fast forward through files 2-18. The diskette spins like a record and the heads move to the correct track, providing what is known as direct access storage.

The major parts of a FDD include:

The read/write heads do not touch the diskette media when the heads are traveling between tracks. Electronic optics check for the presence of an opening in the lower corner of a 3.5-inch diskette (or a notch in the side of a 5.25-inch diskette) to see if the user wants to prevent data from being written on it.

Click on the picture to see a brief video of a diskette being inserted. Look for the silver, sliding door opening up and the read/write heads being lowered to the diskette surface.
Read/write heads for each side of the diskette
Floppy Disk Drive Terminology

Writing Data on a Floppy Disk

The following is an overview of how a floppy disk drive writes data to a floppy disk. Reading data is very similar. Here's what happens:

On a typical floppy disk drive, the small indicator light stays on during all of the above operations.

Here are some interesting things to note about FDDs:

Floppy disks, while rarely used to distribute software (as in the past), are still used in these applications: