How do I future-proof my computer?

Browse the article How do I future-proof my computer? 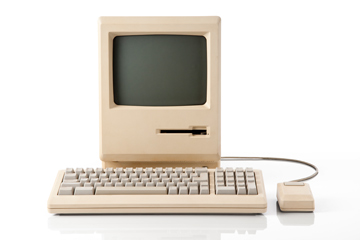 Could you have future-proofed this classic Macintosh computer back in the early '90s to anticipate today's computing trends and technologies? Probably not.
iStockphoto/Thinkstock

Here's a good idea: Instead of getting a computer that's going to be obsolete and make you look like your grandmother in three years, how about you decide to upgrade -- or even build -- your own computer that will last eons and eons?

You might already realize why no one has fully latched onto this particular plan. Future-proofing your computer essentially means making sure it has an amalgamation of the latest technology and hardware that will (hopefully) make it last longer (and require fewer upgrades) than buying a new computer every few years. But is it really possible to future-proof your computer? If it is, how can you do it -- and why isn't everyone doing it already? In the next couple of pages, we'll discuss what future-proofing is and if there are some effective ways of going about it.

The short answer is ... kind of. There are some ways to future-proof your computer, but watch out: Nothing lasts forever. Technology that's cutting-edge -- especially parts like your motherboard and processor -- will probably have a pretty long life. That's because these big components are more slowly adopted and thus less likely to become outdated fast. If you're researching trends as well, you can find motherboards and processors that will be able to support software for a long time, even as the software itself requires more resources.

Keep in mind that this applies mostly to those building their own PCs or adapting one. There's a strong argument to be made that premade computers -- your Macs, your Dells -- are a very reasonable deal, even from a future-proofing point of view. Buying really expensive, state-of-the-art parts is going to set you back a lot of money initially. Whether you'll really make up the cost from the out-of-the-box computer is not a foregone conclusion, which leads us to a few reasons why you really can't future-proof your computer in a lasting, meaningful way. Just as that little voice in the back of your head warns you, nothing lasts forever. Actual future-proofing would require an accurate fortune teller who could predict what kind of technology will be necessary and in-demand three, five, ten years from now. It's simply unrealistic to guarantee the potential of computer hardware.

The general consensus seems to be that spending a reasonable amount on what you need and then upgrading components (or computers) is more practical than spending an absurd amount on a possible trend.

What makes computers outdated or obsolete?

If you're curious about future-proofing, perhaps we should look at how a computer becomes archaic in the first place. Because the truth is, future-proofing is only going to affect a small number of computer users in general.

First off, we must keep in mind that eventually, all computers (and technology) will become obsolete. Imagine trying to future-proof your Walkman in 1988, for instance. Yup, you could've added more battery power or a clearer sound, but you were never going to get your New Kids on the Block CD -- or MP3 -- to play on it. You can only go so far to adapt current technology to what the future holds. You could buy a really, really fast processor for your laptop, but what if anything without a touch screen is passé in three years?

Most importantly, what are you using your computer for? The irony of the situation is that people who probably want to future-proof their computers -- those using advanced software and resources -- are the least likely to have success preparing their computers for future use. If you're primarily using your PC to type up Word docs or to connect to the Internet so you can answer your cousin's e-mail, you're in luck. Your computer will probably last a lot farther into the future because you aren't requiring much from it, other than what was already on the market in 1996.

But those of us who are heavily involved in the tech industry and crave cutting-edge games, software and processing are going to have a little more trouble. Those things are rapidly changing in the market and not just because they're getting better or more progressive. In the case of RAM, for instance, it's becoming a lot cheaper to get more memory. If you had future-proofed your computer with a ton of RAM five years ago, you're probably be kicking yourself now, as the price of RAM has dropped significantly. As a result, paying for an upgrade now is a lot cheaper than having the biggest allowance you could get at the time.

That's another reason you should be keeping your eye on what the computing future looks like for your specific purposes instead of pondering future-proofing. Think about what you want for now and you're more likely to be able to make strategic, value-driven upgrades in the future.

I'm not really the prime target for future-proofing. My computer use basically takes place in word processing, music players and a Web browser. My computer will probably be current enough for me into the next decade. But for some, future-proofing seems like a good way to save money as they stay on the cusp of the technological edge. But beware: You're still going to need to update your components, and you probably aren't saving yourself much money. Think about what you need and what you'll use but be careful not to dig yourself in too deep with an initial investment.