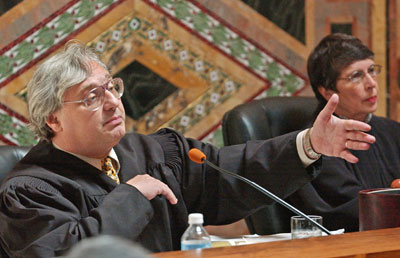 A woman stands in line at the airport, waiting to get through customs to return to the United States. She checks her BlackBerry for e-mail messages and shifts her computer briefcas­e to her other hand. Two uniformed men walk up to the traveler and ask her to step out of the line. They explain they're conducting a random search and that they need to look at her phone, her laptop and any other electronic devices she has. The woman asks when she can expect her property to be returned to her. The men in uniform tell her they can't be sure; they'll return the electronics when they're done searching.

According to the 9th Circuit Court in San Francisco, such a scenario is not only possible, it's completely legal. Federal Customs and Border Patrol agents have the right to confiscate and examine electronic devices belonging to anyone entering the United States. The agents aren't required to have probable cause before searching someone's devices. And they can look for any evidence of any crime at all.

This policy worries many international businesses that employ people who travel to and from the United States on a regular basis. It also might come as a shock to many U.S. residents. In most cases, citizens are guaranteed protection against unreasonable searches and seizures. Some people say that a policy in which a government agent could confiscate any electronic device for an indefinite length of time with no probable cause contradicts the Fourth Amendment of the U.S. Constitution. The 9th Circuit Court seems to feel otherwise.

U.S. Homeland Security officials claim that the policy is in place to protect the safety of the nation. They also claim that agents will not profile passengers or stop people based solely on their ethnic background or country of origin. But some critics say that in practice agents seem to target people from specific countries. An article in The Seattle Times suggests that government agents focus on Muslims and people from the Middle East or the southern parts of Asia more than others [source: Tu].

Border searches fall under the category of delicate issues -- proponents point out that an effective search might save millions of lives while critics say the potential for policy abuse is far too high to justify such an approach.

Who Watches the Watchmen?

U.S. Senator Russ Feingold of Wisconsin is leading an initiative to require border agents to have probable cause before confiscating any electronic equipment. Feingold has criticized the Department of Homeland Security for the way it has formulated and executed its search and seizure policies [source: The Tucson Citizen]. 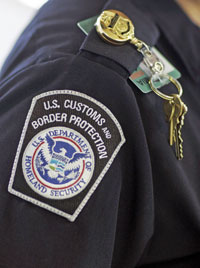 On July 17, 2005, Customs and Border Patrol agents at Los Angeles International Airport stopped a U.S. citizen named Michael Timothy Arnold for secondary questioning. Arnold had just arrived at the airport from the Philippines. During the questioning, an agent asked Arnold to turn on his laptop computer. Arnold complied, and the agent handed the laptop over to a coworker.

The second agent looked at Arnold's computer desktop and saw that two folders contained pictures. The agent opened the folders and viewed the photos. Before long, the agent began to suspect Arnold possessed child pornography. The agents seized the laptop and other equipment but let Arnold go.

Two weeks later, federal agents secured a warrant against Arnold based on the material found on Arnold's digital media. That included not only the laptop, but several CDs, a portable hard drive and a flash memory drive. Agents charged Arnold with possession and transportation of child pornography.

Arnold's lawyers filed a motion to suppress the evidence found by the agents. They claimed that the agents overstepped their authority by searching Arnold's electronic data. They argued that while it's almost second nature to expect agents to search for potential physical threats that could pose an immediate danger -- a bomb disguised as a laptop, for example -- actually searching the contents of the devices was another matter.

The district court agreed with Arnold's lawyers and suppressed the evidence. But the prosecution appealed the decision, and the case went to a higher court. That court reversed the district court's decision, saying that searches at the U.S. border, including customs, are exempt from the qualifications government agents must meet for searches elsewhere [source: United States v. Arnold].

Arnold's lawyers appealed that ruling, and the case moved to the 9th Circuit Court in San Francisco, California. In a 3-0 decision issued on April 21, 2008, the court ruled to uphold the previous court's decision to reverse the ruling [source: United States v. Arnold]. The court's decision means that in order to protect national security, federal agents can confiscate electronics without probable cause and search them for evidence of a crime.

While the U.S. Department of Homeland Security says it intends to use this policy to help protect the United States from terrorist attacks, the judgment itself says agents can look for evidence of any crime at all. That means agents can comb through files and look for anything that might be illegal. Electronic searches can take days, weeks or even months to complete. Agents can confiscate electronics for an indefinite length of time -- there's no way of knowing when, or if, the government will return a device to the owner.

A Different Kind of Search

Searching an electronic device for evidence of a crime means that you're looking at digital information rather than physical objects. Some people worry that the court's decision to support border searches without probable cause will lead to more intrusive policies. After all, if agents can look at the information on your machines when you cross the border, is it a stretch to say they might soon be allowed to monitor all international Internet traffic passing through the United States? The court has already established that it's the information, not the container, that counts as evidence. If the container doesn't matter, then where's the line dividing a search of a physical machine and monitoring Internet traffic? 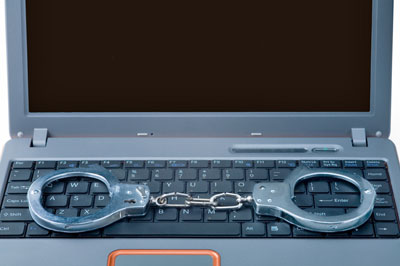 How Anonymous Works
Exactly what is a zero-day vulnerability?
Could hackers devastate the U.S. economy?