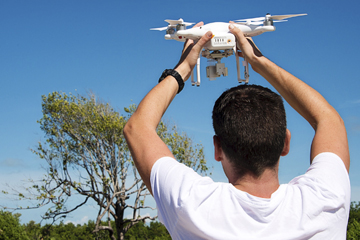 A drone is essentially a flying computer, and is as hackable as any other laptop or desktop device.
Brodie Computes Inc./Getty Images

We live in an age of hackers. Whether it's yanking payment and credit card information from large retailers, pilfering personnel information from the U.S. government or snatching a treasure trove of juicy emails, salary information and unreleased films from Sony Pictures, the black hats are out there and they're trying to get in. Everything is a potential target, and that includes drones. Hackers have developed malware designed to infiltrate and overtake the small quadcopters that you might find hovering around your local park or eventually dropping off your Amazon packages. They've also come up with a way to bring down the high-powered unmanned aerial vehicles (UAVs) increasingly employed by military forces [sources: de Looper, Sternstein].

Maldrone is a type of malware specifically aimed at UAVs and intended to hack into drones via Internet connections. Drones, after all, are essentially flying computers. As such, they're susceptible to the same type of hacks as a laptop or smartphone. Drone hacking technology can be used to either swipe the data that the machines collect or even take over their physical control [sources: de Looper, Sternstein, Moskovitch].

SkyJack, for example, looks like a run of the mill drone, but is designed to hunt down other UAVs, hack into them and control them. In other words, it could potentially be used to amass a fleet of zombie drones. Samy Kamkar, the hacker behind the Internet worm that crippled MySpace in 2005, has publicly released the specs for the SkyJack drone, giving hackers all the info they need to build their own versions. The machine runs on software that directs it to locate other drones within a certain area and take over their control by severing the drones' Internet connection with its rightful owner [source: Crook].

Meanwhile, military drone hackers look to bring down UAVs by confusing them. Iranian officials, for example, say that they were able to ground a U.S. Air Force drone flying along the country's border with Afghanistan in late 2011 by manipulating its global positioning system (GPS). It's believed that the hackers first jammed the drone's communication links, leaving it unable to send and receive information and controls to and from operators on the ground. The move also disconnected the drone from the GPS system that it used to coordinate its path. As the drone switched to autopilot control, it also went looking for unencrypted GPS frequencies. The hackers sent the drone "spoof" coordinates that led the machine to believe that it was close to its home base in Afghanistan. Instead, the machine landed in Iran [sources: Moskvitch, Sternstein].

The spoofing attack has led to an arms race of sorts, with military drone outfits scrambling to beef up their protections against hackers. Among other moves, experts recommend hiding the exact positions of GPS receivers to make them more difficult to locate. The U.S. military is currently working with Boeing to develop a "hacker-proof" drone which would shield its onboard communications system from potential attacks. The computers operate on a new programming language that creators say is less vulnerable to hacks. At least for the time being [source: Sternstein, Sternstein].