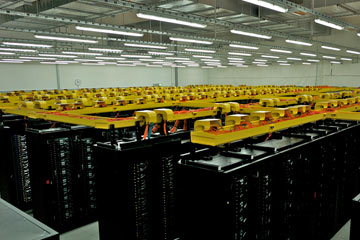 SuperMUC uses 40 percent less energy than would be required by an equivalent air-cooled system.
Courtesy of IBM Research - Zurich

If you think about it, computer engineering has always focused on decreasing size and heat concerns just as much as it has on increasing computing power. That's true whether you're talking about a laptop, massive mainframe or even your tablet, but real jumps in utility, green technology and size constraints are even more important on the supercomputing scale than with the things we use every day.

In July 2012, engineers at the Leibniz Supercomputing Centre (Leibniz-Rechenzentrum, or LRZ, in German) debuted their new SuperMUC supercomputer, which uses water-cooled servers to approach performance levels of up to three petaflops, or basically the work of more than 110,000 personal computers. While SuperMUC's heat management system -- which sits on top of the mainframe, carrying water though microchannels on the hardware itself -- is called "hot water" cooling, it's kind of a misnomer.

The system was inspired by the way blood and water move through our bodies, and keeps the machine at about 45 degrees Celsius (113 degrees Fahrenheit). The reason engineers stress the hot water aspect of this system -- which improves performance while shrinking the system by 10 times and using 40 percent less energy -- is to emphasize the difference from standard air-cooling and the way we usually think of fluid coolants [sources: Clancy, IBM Labs].

But what exactly is that water doing, and why is the design so groundbreaking? 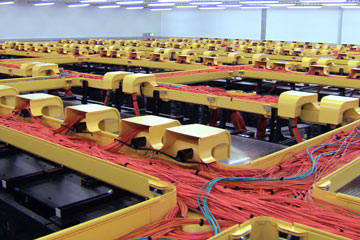 How the Motorola Xoom Works
How the MacBook Air Works
How will computers evolve over the next 100 years?