by Patrick J. Kiger Mar 22, 2017
As Google phases out its CAPTCHA identity verification, the jumble of letters and numbers will live on in the public consciousness, if only in art installations and graffiti. Aram Bartholl/Flickr

In case you haven't already noticed, the Internet security firm Imperva reported in January that slightly more than half of all Internet traffic originated with automated programs, or bots. Many masquerade as people in order to post spam comments on blogs, harvest email addresses for spammers, rig online polls, and all sorts of annoying stuff. Brokers even have used bots to gobble up all the available tickets for pop concerts, a practice that Congress recently made illegal.

For years, websites have been trying to thwart bots by deploying various versions of a widget called CAPTCHA (short for Completely Automated Public Turing Test to Tell Computers and Humans Apart). Originally, CAPTCHAs would display a block of distorted text — the sort that computer programs with optical character recognition capabilities struggle to comprehend — or ask them to solve a puzzle, or answer a question such as "What is 1+1?"

A later version called reCAPTCHA added random warping and lines to make it even tougher for a machine to figure out. Google acquired reCAPTCHA in 2009, and in 2014 began offering an even more sophisticated widget that only required a user to check a box, verifying that he or she wasn't a robot. According to Wired, the program was imbued with capabilities that allowed it to spot subtle signs of human-ness, including the tiny hovering movements that a person makes with a mouse as the cursor approaches the box.

But Google still kept tinkering with reCAPTCHA, and the latest beta version, Invisible reCAPTCHA, is so smart that you don't even have to check a box anymore. Check out Google's video explainer from 2016 when the program was still being tested:

It tries to spot whether you're real or fake from other things that you do on a web browser's page — how you move an onscreen pointer, as mentioned above, or if you even use one instead of just going straight to certain code — and analyzes your browsing history and habits. It'll work even more quickly for users who are signed into Google accounts, as they'll automatically provide more information about themselves. If it detects a sign that you may not be a person, the program then will confront you with one of the old reCAPTCHA challenges. So those squiggly text tests won't completely vanish. They'll just pop up if Google's system suspects there's something fishy — or botty — about your humanity.

Fortunately, unlike Leon the Replicant in "Blade Runner," the bots that are identified won't react violently. We hope.

Now That's Interesting
Google actually purchased reCAPTCHA to aid in its book-digitizing and Google Street View efforts. When Google's OCR software comes across a picture of distorted text that it couldn't read, that image is flagged and sent to reCAPTCHA so that it can be solved by humans. And if you've ever seen a number or name in a reCAPTCHA that looks like it came off a street sign or house, that's because it did, according to ArsTechnica.

What's a Tall Fashionista to Do? 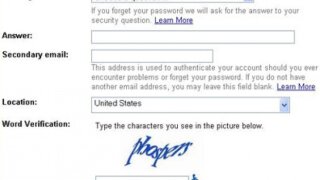 Brainwaves and 'Emotional ID' Could Replace Passwords and PINs