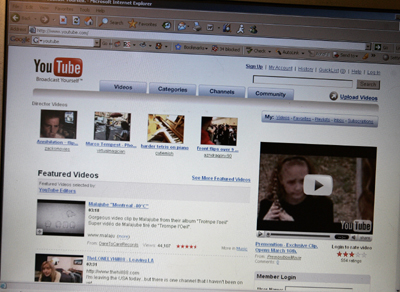 Your best friend is about to jump over your mom's minivan on his skateboard. Blindfolded. Eating a foot-long hotdog. This is a YouTube moment.­

You grab your cell phone, record the glorious crash, upload it to YouTube, and within minutes, millions of people are watching your buddy smash face-first into a Dodge Caravan.

Video sharing has exploded in popularity. From 2006 to 2007, the number of people who visit sites like YouTube, Google Video and MySpace TV has doubled. Nearly half of all American Internet users have checked out a video sharing Web site. Among men ages 18 to 29, that number jumps to 70 percent [source: Pew Internet & American Life Project].

What's incredible is how recently video sharing has become such a phenomenon. YouTube launched in December 2005. Its success has spawned dozens of similar community sites for amateur filmmakers, professionals and everybody in between. But because the world of video sharing is so new, it's hard to know where to get started.

How do you record digital video? How do you get it on your computer? How do you upload it to one of these Web sites? Keep reading to find out how it all works.