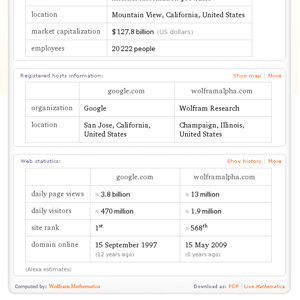 Enter "Google and Wolfram Alpha," and you'll get a comparison of the two companies.
Screenshot by HowStuffWorks.com

If so many people want to pit search engine giant Google against the newcomer, why don't we take a look at the two of them and see how they stack up?

According to Wolfram|Alpha (which used Alexa.com as a source), at the time of this writing, google.com gets 3.8 billion page views per day. Alpha, on the other hand, gets 13 million page views. Google's No. 1 on the Web, compared to Alpha's 568th.

But that doesn't tell the whole story. Google makes its money from advertising. In 2008 alone, Google earned revenues of $21 billion -- 99 percent of that was advertising-related [source: Buley]. Wolfram Research is also using advertising to subsidize its site, using a contextual "featured sponsor" box that appears to the right of some search results.

Wolfram|Alpha may need to find other ways to generate income. There are around 250 people working behind the scenes on the site [source: Shankland and Needleman]. Curating data by hand is costlier than sending spiders out to catalog Web sites. It's also more time-consuming. The database Alpha used at launch took three to four years to build [source: Beaumont].

It's possible, too, that Wolfram Research may sell customized subscriptions to organizations that want to compare proprietary information with the Alpha database. There's also an application programming interface, or API, that will allow developers to blend the functionality of their sites with Wolfram|Alpha [source: Shankland and Needleman].

But Google co-founder and President of Technology Sergey Brin got a demonstration of the Wolfram|Alpha technology by Stephen Wolfram himself prior to the site's launch [source: Levy]. This suggests the two might find a way to partner. On the other hand, some think Google Squared, a search feature that will enable Google users to compare data in ways similar to those used by Alpha, shows a desire to crush the upstart. However, Google Squared evaluates data found online, not the exclusive proprietary databases, as Alpha does [source: Talbot].

As Stephen Wolfram said in his March 2009 blog post, Alpha is a massive project that will never be finished. Time will tell if it manages to carve out a niche in Internet users' hearts or whether its technology will end up underpinning search efforts on other sites.

For more on Internet search technologies and related topics, take a look at the next page.