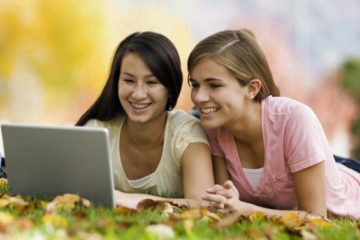 How much time does your child spend online?
Brand X Pictures/Thinkstock

As one of the most visible social networking sites on the Internet, Facebook is ground zero for speculation about the impact of social media on children -- and everybody else. Is Facebook more than a cyberspace playground where kids can gather to exchange gossip, share photos and interact? Maybe there's a darker side to what the Facebook info page describes as a place to "keep up with friends, upload an unlimited number of photos, share links and videos."

If you're worried about how much time your child spends on Facebook and other social sites, you might have good reason to be uneasy. Although it may still be too early to understand the long-term effects of social media interactions over good old-fashioned, face-to-face relationships, a University of Maryland study published in April of 2010 has created some real concern. The study released by the International Center for Media & the Public Agenda (ICMPA) concludes that social media is addictive.

The study involved 200 college students who described their reactions to going "24 hours unplugged" as very anxious, extremely antsy, jittery and miserable. This sounds ominously like withdrawal from an addictive substance or influence. The study parameters included abstaining from phone use and watching television, too, but it's still a warning sign about our growing dependence on social media to maintain connections -- even to people who live nearby.

Americans between the ages of 8 and 18 spend an average of seven and a half hours involved with electronic media daily. There are some far-reaching implications to this statistic when you consider the notion of raising a generation of children who rely heavily on mass media and sites like Facebook for information and meaningful interaction. One big concern is that distanced relationships may not provide the intimacy, responsibility and caring necessary for children to develop a sense of connectedness and empathy with those around them. The prognosis isn't entirely bleak, though. Some shy children may benefit from the opportunity to interact with others in a distanced, less threatening way. In the end, the key may be in understanding your child and providing effective guidance.

If you want to work with your child to create a balance between safe online activities and satisfying offline interactions, consider these:

If you think your child may be addicted to Facebook, sit down with him and discuss some ways he can use his time more productively. Encourage him to explore interests outside of cyberspace, and consider taking the time to participate in a few new after-school or weekend activities with him.

If you think your child is sending too many text messages, consider this: According to the Pew Research Center, one-third of American children between the ages of 12 and 17 send out more than 100 text messages each and every day.