Browse the article How Newsgroups Work 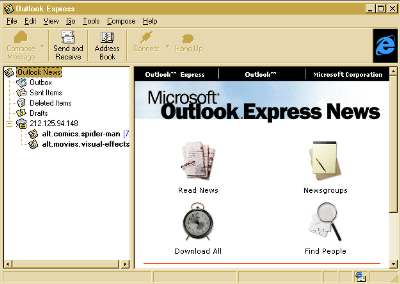 Although most of the hype and attention that the Internet gets today is about e-commerce and business, there are two main reasons that most of us use it: communication and information. We rely on the Internet to send e-mail and instant messages, and search through the World Wide Web to find information for work or play.

One source of both information and communication is newsgroups. A newsgroup is a continuous public discussion about a particular topic. You can join a newsgroup at any time to become part of a huge conversation between hundreds or even thousands of people.

Newsgroups originated in North Carolina back in 1979. That's when a couple of Duke University students hooked a few computers together to start an exchange of information with other UNIX users. Just down the road at the University of North Carolina in Chapel Hill, another student was writing software that could be used to distribute the information. Eventually, the work of these three students became the first bastion of newsgroups, termed Usenet.

In this edition of HowStuffWorks, you will learn the difference between newsgroups and other types of electronic communications. You will also learn how newsgroups work, where to find them and how to subscribe.

Along with e-mail, newsgroups are one of the oldest communication methods on the Internet. But there are many ways to communicate on the Web. You probably use more than one method, depending on your needs. Let's take a look at the different methods and when you might use them:

E-mail - By far the most popular means of communicating over the Internet, e-mail allows you to send a message directly to another person or group of people. Messages can range from short to long and may include quotes or attached files. You can learn more about e-mail in the article How E-mail Works. E-mail is most effective when:

Chat - Chat is a conversation between two or more people that takes place in a chat room. The chat room software allows a group of people to type in messages that are seen by everyone in the "room." Chat rooms can be found all over the Internet, including on the America Online service and the Web site TalkCity.com.

Chat is most effective when:

Instant messages - Instant messaging is something of a cross between chat and e-mail. It allows you to maintain a list of people that you wish to interact with. You can send messages to any of the people in your list, as long as that person is online. Sending a message opens up a small window where you and your friend can type in messages that each of you can see.

Instant messages are most effective when:

Newsgroup - As stated earlier, a newsgroup is a continuous public discussion about a particular topic. Newsgroups are decentralized, which means that the messages are not maintained on a single server, but are replicated to hundreds of servers around the world.

Newsgroups are most effective when:

Forums or discussion boards are most effective when:

Listserv - Most of us probably belong to one listserv or another. Every time you register for a newsletter, such as the free HowStuffWorks newsletter, you are placed on a listserv. Basically, this is a type of broadcast e-mail. Information on a listserv is sent to everyone who is listed in the e-mail group on the server. The biggest difference between a listserv and a newsgroup is that listservs are not interactive.

Listservs are most effective when:

Conferencing - Conferencing is like a chat room on steroids. The conference software, such as Microsoft Netmeeting, allows you to have a real-time chat with one or more other users. It also allows you to do such things as share an electronic whiteboard or a software application. Most conferencing-software packages provide several means of communication, including text only, audio and even video.

Conferencing is most effective when:

Video - Some users take advantage of a fast connection, such as a cable modem or DSL, in conjunction with a Webcam to communicate by way of video. This method of communication is not common yet, but will probably increase in popularity as the number of users with high-speed connections increases.

Video is most effective when:

IP Telephony - Another emerging communications technology is IP telephony, which uses the Internet in much the same way that a regular telephone uses a phone line. Most IP telephony software requires that each person who wishes to talk have a computer, Internet connection and special software. But some companies, such as Net2Phone, provide software that allows you to call someone directly over the Internet and connect to that person's normal phone.

IP telephony is most effective when:

Most of the methods described above require some type of client software on your computer. In most cases, the client software is either free or integrated with another software application. For example, Netscape Navigator and Microsoft's Internet Explorer and Outlook Express each includes a newsgroup reader client that you can use to subscribe to newsgroups. We'll talk more about subscribing to newsgroups later. 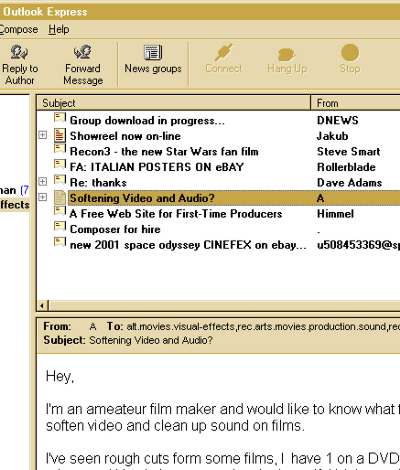 Similar to most e-mail programs, you normally can click on the title of a newsgroup post in order to read the message.

Newsgroups use a lot of special terms to describe the newsgroup process:

Forte' Incorporated's FreeAgent newsreader is a good example of an offline newsgroup client. 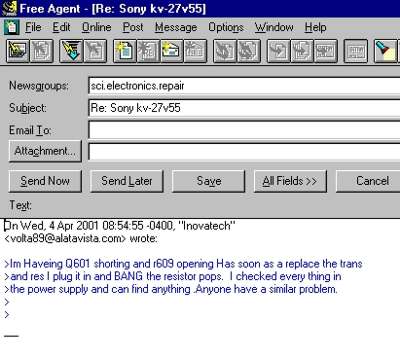 Replying to a post in a newsgroup is as easy as replying to an e-mail.

A newsgroup begins on a single news server, but is eventually replicated to hundreds or thousands of other servers. News servers provide the infrastructure that makes newsgroups work. Each news server has special software that maintains a file for each newsgroup serviced by that server. 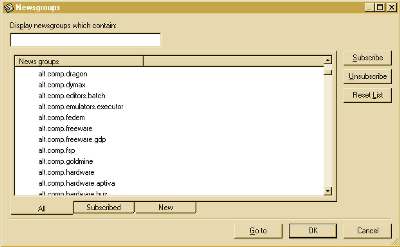 You can narrow down this huge list of newsgroups in Outlook Express by using the "Search" field at the top of the window.

Now that you know about newsgroups, you're probably wondering where to find them and how to subscribe. Usenet carries a great list of newsgroups, plus lots of information on newsgroups in general.

Subscribing to a newsgroup is pretty easy:

You may be interested in creating your own newsgroup. The process takes some time, but is fairly simple. Here are the steps:

Newsgroups will never replace e-mail or chat rooms for quick communication, but they are definitely a valuable online resource when you are looking for very specific information or help with a problem. And, with the amazing variety of topics, there is certainly something for everyone.