Browse the article How Tweetups Work 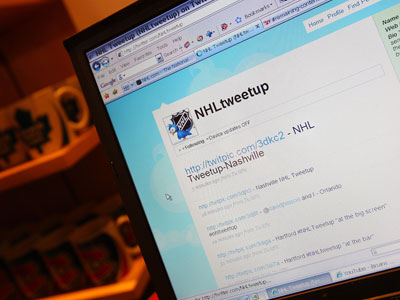 One thing's for sure: There are countless ways to use the word "tweet" that convey new meaning. "Tweetup" is one example -- a made-up word that rhymes with "meet up" and essentially means just that. A tweetup is when a group of Twitter users meet up in person, an event that's orchestrated via the Twitter social networking Web site. It's what happens when the members of an online community decide they want to look each other in the face.

Tweetups run the gamut -- from the quickly arranged to the highly organized. Some tweetups are simply an informal opportunity for a group of people who "follow" each other online to meet in real life. Others are larger, more formal networking or charity events. Turnout for these events can be difficult to predict. It's the way of the Internet. If you're the average Joe Twitter user, you might expect six of your followers to show at your tweetup, and, instead, 20 do. Twitterers have a tendency to invite friends who aren't your followers and who may not even know what the social network is.

The tweetup was invented by the Web site's users, not by Twitter's C-suite. But the concept jumped into the mainstream when charity event organizers saw it as a clever way to gather a crowd for a good cause. And, of course, other Twitter members that use the social network to market their goods and services followed suit.

While the tweetup is gaining popularity, unless you're a Twitter super user, you may not know what these events are all about. How would you organize such a gathering? And will people really talk to each other or just stand around twittering silently via iPhone the whole time?

Why Host a Tweetup?

So what's the benefit of connecting a username with a face? Is meeting the people behind all those witty tweets and tinyurls really beneficial? Actually, tweetups can be a great way to get to know people in your area who share similar interests. You probably amassed your group of followers based on common hobbies or even professional pursuits, so you might enjoy a small gathering with your online community for breakfast or drinks.

Small informal gatherings aren't the only tweetups out there, though. Sometimes large organizations get behind them. For example, in 2009, the National Hockey League became the focal point of tweetups across North America. During the Stanley Cup playoffs, 24 different cities hosted tweetups, with each city organizing its own gathering. While some of the tweetups had official backing by the NHL or participating teams, with representatives expected to visit and bring swag, others were informal gatherings in bars or restaurants.

Organizations looking to raise money for a good cause have also found that tweetups are a good way to rally support. These tweetups may raise money in a variety of ways -- selling tickets for admittance, hosting an auction or raffling off items that have been donated. People who aren't able to attend the event but hear about it through Twitter may even donate to the cause. The many marketing professionals who frequent Twitter often are willing to donate time and talent to organizing tweetups that benefit charities.

Professionals also use tweetups to network with people in their fields. Some networking tweetups are aimed at professionals working a particular field, others at employees in various fields who have similar roles, and still others are staged by companies.

Politicians like tweetups also, and if there's a local election coming up, you may receive an invitation. These gatherings typically combine fundraising with lots of information on the candidate or the cause. The candidate may or may not be there, but you can bet that a representative will be.

While attending a tweetup can be a lot of fun and a great way to meet new people or raise money, organizing a tweetup can also be a rewarding experience. How would you go about coordinating this type of event?

South by Southwest (SXSW) is a legendary music, movie and technology gathering. Held in Austin, Texas each spring, you can bet that this spot will have multiple planned and spontaneous tweetups. In 2009 there were daily tweetups planned, as well as many impromptu gatherings. News of the impromptu gatherings spread, of course, through Twitter, but also the old-fashioned way -- through word of mouth.

How to Organize a Tweetup

The first step to organizing a successful tweetup is to decide on a purpose. If all you want to do is to meet some of your followers in the area, your tweetup will be a lot different than if you're trying to get a job or raise money for a cause. Once you decide on your reason to "tweetup," you're ready to get started with the planning.

If your tweetup isn't just a casual gathering, you may want to draw on the experience of marketing or public relations professionals. Their help can increase attendance as well as ensure that you have a diverse group of attendees. Fortunately, the Twitter user base is full of marketing pros who are typically happy to do a little pro bono work for a group they're a part of. A simple tweet asking for help to organize a tweetup and permission to RT (retweet, or repost) may be all you need to connect with willing volunteers.

As you're planning the event, you may be inclined to post updates on its development. But it's not necessary to twitter about every change in the plan. If you twitter about it too much, you may get so much feedback that it's impossible for you to make a decision that pleases everyone. If you're working with a small group to plan it, it's best to confine that to e-mail or phone conversations.

Choosing a location for the tweetup is an important part of planning. The informal nature of online social networking makes it difficult to determine whether you'll have five attendees or 50. The best you can do is choose a bar, restaurant or outdoor venue that's roomy enough for the most people you could expect to come and cheap enough to reserve.

Once you've narrowed down your location choices, visit each venue. A dark bar in a dodgy neighborhood is not where your followers will want meet up with what is essentially a bunch of strangers. You'll also probably want a location that has Wi-Fi and cell phone reception. Even in the heart of town, there are often dead spots. Twitter users are generally a technologically savvy crowd, so they'll be unhappy campers if they can't get connected.

It's important to have a focus for the event. Hosting a speaker is an excellent way to increase attendance. For professional networking, people often come with the expectation of a meet-and-greet only, but adding a speaker is a great way to give the event structure.

Political and charitable fundraisers are a little easier to structure. The difficulty with these types of events is nailing down speakers who'll draw a crowd. Tweetups are such a new concept that many notable politicians and speakers may not yet understand the concept or the potential reach of such an event.

Now that you've planned your event, what should you keep in mind as you entertain your guests?

Charity: Water has set the standard in charitable tweetups. On Feb. 12, 2009, there were tweetups in more than 180 cities around the globe. The purpose of these tweetups was to raise money for Charity: Water, an organization that provides clean drinking water for families by drilling water wells in their communities. The event raised over $250,000, which is enough money to provide clean drinking water for more than 15,000 people [source: Twestival].

How to Entertain at a Tweetup

There are several things you can do on the day of the tweetup to ensure its success. It's important to get there early and make sure everything is ready when the crowd starts to arrive. As with any party, you'll want to make sure there's plenty of food and drink, places to sit and easy access to restrooms. Know where everything is located so that when people start walking through the door you can easily give directions.

If you planned the tweetup, then be a proper host. Don't count on people introducing themselves and mingling on their own. After all, if this is the first tweetup you've had for your community of followers, then these people are basically strangers. Get the mingling going by greeting each person when they arrive. As the crowd picks up, introduce one person to another. And importantly -- hand out name tags. Name tags are one of the coolest aspects of the tweetup. The name tags at these events are typically filled out with an @username -- the same way a reply is posted on Twitter. Wear the name tag with your @username, and then introduce yourself using your real name.

There's a lot of talk about how important social networking Web sites will become in the future. Tweetups are one example of how online interactions can turn into face-time. As more people become comfortable with the concept of tweetups, the line between online community and real community may become blurred.

The larger the tweetup, the more important the planning is. There are a variety of online tools that can help you to organize a tweetup. Event management tools such as Eventbrite and Meetup allow you to plan, send invitations and manage responses. It's relatively simple to use these applications to manage your event.

Of course, it didn't take long for a Twitter-dedicated utility to come along. Twtvite is a small application that you can add to your Twitter account. It allows you to manage an event and send out notification tweets. To use Twtvite, enter your Twitter name, the name of the event, its location, the time and date, and a 140-character description of the tweetup. Twtvite allows you to share the information not only on Twitter, but on Facebook and via e-mail as well. You can use a Twtvite widget to add your Twtvite to your Web site or blog as well, complete with an area to RSVP.