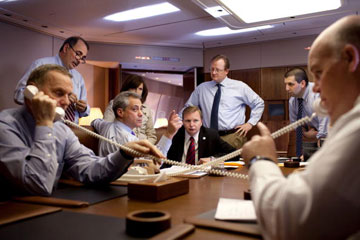 When the World Wide Web emerged for widespread public use in the early 1990s, it transmitted data -- text, photos and more -- via phone lines. You used a modem attached to a computer, dialed a local "access number," and then you were free to surf the Internet. You may have had to pay an Internet service provider, but the transmission method was basically just a phone call. In the years following, Internet access via DSL and cable lines made the fast transmission of large amounts of data possible, meaning the Internet had huge data capacity. In short, we're now using the Internet to make phone calls, where we used to use phone calls to get on the Internet.

This technology is called Voice over Internet Protocol technology, or VoIP. Simply put, voices are transmitted as data via the Internet. An extension of VoIP is called IP trunking, in which multiple users with the same Internet connection -- several workers in the same office for example -- use VoIP to send and receive data, both Internet and voice. VoIP and IP trunking is big business. It's a new communications framework, slowly replacing the old phone company infrastructure. Also called "unified communications," IP trunking will be a $17 billion business in just a few years [source: Viscusi]. It's a good time to learn what the new standard in telephony will be, as well as the specifics on how, exactly, a computer network turns voices into data, then back to voices, to create a seamless phone call.

What is IP Trunking?

IP trunking is large-scale, corporate, industrial or institutional use of VoIP. An entire organization hooks into the data world at large via one connection; that connection is then split among all the parties' phones and computers. While VoIP is used in millions of homes, IP trunking is almost exclusively used by businesses because they're the ones that have a need for multiple telephone lines and many telephony services (call waiting, voice mail systems, call forwarding, etc.), which are also carried via certain IP trunking services.

At its core, IP trunking and VoIP is voice on data lines. That means that voices travel over the Internet as bits of data, not "voices" or electrical impulses as they do on a traditional, land-based telephone line.

In addition to large data capacity methods like DSL and cable Internet, one of the ways IP trunking can handle multiple phone calls -- as well as Internet data usage coming from multiple places on a forked communications network in one building -- is via cloud computing. This means that the power of multiple computers all comes together to create a virtual, ad hoc "supercomputer" that, by creating a vast capacity to do so, handles the needs of the network, whatever those needs may be at any given moment. This extends to the IP trunking service provider. Its "cloud" of computers and networks powers your call. So the IP trunking consumer doesn't have to necessarily have a superfast computer or even a large computing network to make sure its calls and its data go through. Cloud computing replaces traditional telephony's line-to-line switching methods.

So now you know what IP trunking is and how it's possible to send a phone call out into the ether of the Internet. Read on to find out exactly how your voice turns into a "data packet," and how it's sent through a series of tubes to its destination. And also get an answer to this question: How do the same data networks can send your e-mails at the same time in the same place?

How Your Voice Travels Over the Internet

Here's how IP trunking makes a phone call happen (without you even knowing you're using advanced technology).

The trunking service run through your service provider is a circuit that connects switches (your system, the receiving party's system) to each other. Because it's using high-volume means of data transmission, such as cable or DSL, it can support multiple calls at the same time (which makes it great for an office).

The same VoIP trunk or network is used to connect multiple users, even remote ones, into the computer/phone framework. Everyone who has a phone in the office has those phones routed digitally through their desktop computers. This is called a privacy branch exchange (PBX). First, you speak into the phone as you normally would. The trunking program on your computer, via a special phone/computer card, then digitizes your voice and compacts it to an Internet protocol (IP) packet, which essentially means that it's "data." The program then addresses and directs that packet to the other PBX -- the person you're talking to on the phone -- via his or her unique computer or IP address. The packet is then sent into the Internet via your service provider's IP network to reach its destination. There, the data is converted back into a voice.

All of this happens instantaneously and alongside packets of Internet/WWW data (e-mails, photos, videos) traveling through the same channels at the same time. This is possible because a phone call is not a "phone call" to the trunking system -- it's data, which takes up very little bandwidth.

Since VoIP and IP trunking are computer-based programs to make calls, it makes sense that the interface for making phone calls is computer based, meaning an application window on your computer screen. You can plug a microphone/headphone apparatus into your computer's audio jack to make the calls. This is called a soft phone because you are using software to make calls.

Option No. 2: a USB phone. They look an awful lot like "real," or traditional, telephone handsets. Available even in cordless models, USB phones simply plug into your computer's USB drive, much like a mouse or keyboard. One costs about the same as a landline phone, anywhere from $10 to $100. 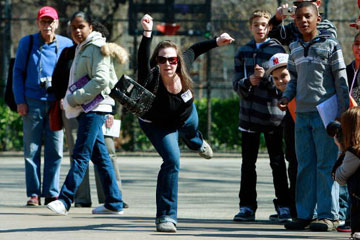 A woman tosses an office telephone while competing in a mock "Unemployment Olympics" in 2009 in New York City. A laid-off computer programmer came up with the event to lift the spirits of the jobless.
Mario Tama/Getty Images

There are many benefits to adopting IP trunking to use for your company's or institution's multiple phone lines. Are you an organization that does a lot of work or research online? Then adopting IP trunking is a logical step to take. The main reason is that it combines your data/Internet network and your phone network. That could potentially save your company hundreds of dollars a month on maintenance fees because the phone and Internet system are now the same system. It could also save you money on employment costs (so long as your existing IT guy or gal knows how to use an IP trunking system). Cheaper communications is one of the best things IP trunking has going for it. Many Internet service providers are also phone service providers, and they're the ones offering IP trunking. Since they run all channels of communication, these companies are empowered to offer "bundling" discounts, reducing your communication rates even further.

One of the main reasons consumer-level VoIP has taken off is because of its flat-fee pricing structure. Services like Vonage charge a single rate for unlimited phone calls, local and long distance included. Because VoIP and IP trunking convert voices to data, you're not technically using the phone lines to make long distance calls -- you're just transmitting data. As far as bandwidth is concerned, your phone call is the same as an e-mail. In short, long-distance charges drop to as low as 2 cents per call, and then just a single monthly fee for each of your IP trunk users, about $20 to $30 per trunk [source: Bandwidth.com]. Another bonus is that because it's a system based on remote data transfer anyway, you can even have users at multiple locations use the same trunk. You don't have to pay for multiple IP trunking servers.

But what if you don't think IP trunking is established enough to use for your primary communication needs? Well, it's always a good idea to have a backup. IP trunking is easy enough to use, and with the equipment you already have around in the office (phones, computers), it can be used to provide network redundancy. If landlines ever go down, but the Internet is still up, it can help you out. Because it's not phone-based in a DSL, T1 or cable setup, you can simply enable VoIP-based calling, resuming communications productivity immediately.

VoIP has quietly been gaining ground as a new communications system for about 10 years in the form of services like Skype and Vonage. It's available in most large- and mid-sized American cities because it piggybacks on T1 and DSL service lines, which are nearly universal in population centers. (Verizon alone has programs in 350 cities [source: Verizon.com].) But even though it potentially frees a business from landlines and can connect multiple, remote users into the same outgoing network, it's not actually available everywhere just yet.

When you research IP trunking, keep an eye out for SIP trunking. This is like IP trunking, but with a slight difference in technology that increases the power of the phone system and allows for more data transmissions. This increased power in an SIP trunking system is used for advanced telephony services, such as voice mail, directory assistance, and 900-number blocking -- all important business needs.

One big problem with VoIP and IP trunking is the relative lack of security. It's not yet as secure as a landline. Landlines provide direct, physical connections of voice to voice. VoIP calls are data traveling by wire and through the air. So potentially, they can be backed into or accessed by someone -- either from within your own IP trunking network, or outside of it. In the early days of widespread cell phone usage, it was common to overhear other people's phone calls.

And even where it is available, services, bandwidth capacity and voice quality vary. So, research different providers before you sign up for anything.

Another option for the device you'll use to make the actual calls is a hard phone. It looks like a phone (or a cordless phone base), but it actually houses a very small computer -- it bypasses the need for a PC entirely. It plugs into an Ethernet port on your Internet router, hooking your phone calls right into the Web. Cost? $100 and up.

A variation on the hard phone is a Wi-Fi phone. This is a good one to use if your computer network uses wireless, Wi-Fi technology to connect to the Internet. Rather than connecting via cords plugged into the Ethernet, the Wi-Fi phone communicates wirelessly with the Internet through a wireless access point. Like a hard phone, it bypasses the need for a PC because it does all of its own "computing" to turn your voice to data and then put that data out into the stream. Cost? $100 to $200.