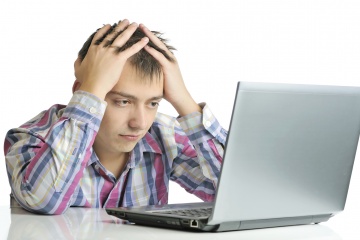 Face it: Your gadgets don't have a long shelf life.
nelik/iStock/Thinkstock

Unless your company sells breakaway glass to the movie industry, "built to break" is hardly a winning marketing slogan. But for many consumers who have purchased anything electronic in the past 15 years, it often feels as though our shiny new devices need to be replaced practically the moment we buy them. Could it be true that our computers are actually built to break?

A 2009 report by warranty service company SquareTrade found that about 20 percent of laptops and 24 percent of less-expensive netbooks will suffer a hardware malfunction (read: fail) within the first three years of ownership [source: SquareTrade].

Even if the device itself still works, new software updates or operating systems may be incompatible with our "old" computers, rendering them obsolete before their time [sources: Chaves, Electronics Takeback Coalition].

The Economist argues that planned obsolescence is part of the business strategy for the computer industry, with the next generations of software and processors in development before the last ones are even on the market [source: Economist].

A 2013 study commissioned by Germany's Green Party found that electronic goods lasting less than two years may have been built badly on purpose, or at least knowingly. The study cited smartphones and notebooks built with batteries that cannot be replaced or with cases that can't be opened because they are glued rather than screwed together [source: The Local].

Others have noted laptops designed with heat-sensitive capacitors on the hottest part of the circuit board (where they are sure to fail), unavailable replacement parts and repair costs that make it almost as expensive to fix a device as it would be to replace it [source: Chaves, Seydtaghia].

The upshot: Unless computer manufacturers experience a sudden urge to come clean, we might never know whether our computers are in fact intentionally built to break. But intentional or not, both evidence and experience seem to indicate that at the very least modern consumer electronics aren't built to not break, so — to the consumer — the end result is the same.