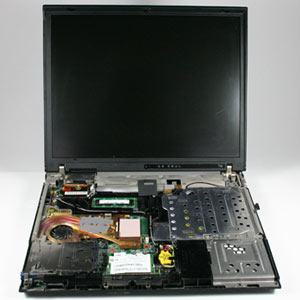 We don't recommend you do this to your own laptop. See more computer hardware pictures.
©2008 HowStuffWorks

Some people love to take things apart to see how they work. But just because you can take a gadget apart doesn't mean you can put it back together again. Even a successful rebuild doesn't guarantee the device will still work. It's best to leave some deconstruction projects to the professionals. When the device in question is a computer, this warning is particularly important.

Computers can be complicated, delicate and even dangerous. But that doesn't stop us from wanting to know what's actually inside one. That's why we here at HowStuffWorks have taken it upon ourselves to dismantle a perfectly innocent computer in the name of science. We chose an IBM ­laptop computer, which not only has all the standard components you'd find in most computers, but also arranges them together into a very compact configuration.

We'll begin with a little laptop neurosurgery. Join us in the next section as we take a closer look at the brains of a computer.