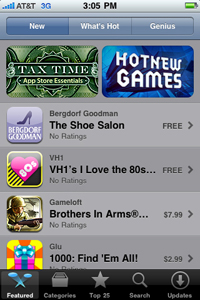 When you first launch the Mobile App Store, you'll see a screen like this one, which highlights featured apps.
Screenshot by Nathan Chandler

When Apple introduced its iPhone 3G and 2.0 iPhone operating system in 2008, it also debuted App Store menu options in the 3G's version of iTunes. The App Store is home to more than 140,000 apps, and they've resulted in billions of downloads. There are apps for just about every conceivable purpose. Apps let you track news, play games, help you finish homework, plan and journal your workout routines, track work schedules and tasks, find recipes and much more.

Users can access the App Store through a dedicated application on the iPhone and iPod touch. You can browse the Top 25 apps to see the most popular titles or perform a search to find specifics apps or capabilities. Before you buy, you can view the app's price, screen shots and read user reviews that tell you just how awesome or awful an app really is.

When you download an app to your iPhone, it's stored in your device's memory. Many people download so many apps and other media that they fill their iPhone to capacity in very little time. To make more space, you have to move or delete apps -- but you'll be justifiably reluctant to remove an app that you've already paid for.

You don't have to permanently delete apps to free up space on your iPhone. The next time you sync the iPhone with your computer, iTunes will back up a copy to your computer's drive, too. Those apps are stored in iTunes, inside a folder called Mobile Applications. To create a backup of all of your apps, you can copy this entire folder to another drive. If you need to restore an app to your iPhone, you can simply drag and drop the backup of your app into iTunes. If you just want to restore an error-ridden iPhone/iPod Touch, or reset it, you can turn on iTunes, plug in the device, and on the device's Summary tab click the Restore button.

Whether you use an iPhone or iPod touch, the mobile version of iTunes enables you to perform almost all of the tasks you'd use your iTunes desktop for. That's a testament to the increasing power of smartphones and portable devices in general. And it's also a sure sign that Apple plans to make its powerhouse program, iTunes, a centerpiece of its business model and product offerings for a long time to come.

For more articles on mobile computing, take a look at the links below.