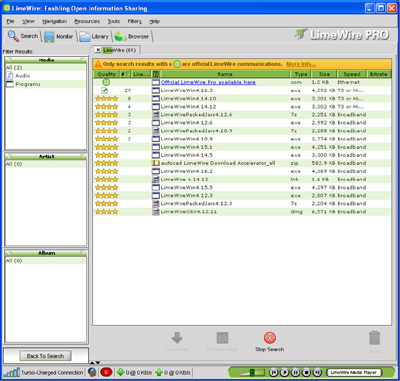 LimeWire, the software application, is completely legal. What many people do with LimeWire -- namely downloading and distributing copyright material -- isn't legal.

LimeWire's defense is that its software is a tool. Like any other tool, its use is dependent on the users. The same hammer that helps build a house can be used to break the back window and rob it. The person who sells the hammer can't be held responsible for how it's used. Right?

In August 2006, several large record companies sued LimeWire for encouraging Internet piracy. They're asking for $150,000 for each song distributed without permission of the copyright holder [source: Cnet]. A week earlier, the makers of Kazaa, another popular file-sharing application, settled with the music industry for $115 million and installed special filters on its software to block copyright material. As of this writing, the case against LimeWire is still pending.

Even if LimeWire is found not guilty, its users are still vulnerable. Since September 2003, the Recording Industry Association of America (RIAA) has initiated lawsuits against more than 20,000 individuals for alleged illegal file-sharing [source: Electronic Frontier Foundation].

The accused individuals receive a letter from the RIAA's lawyers with a settlement offer to avoid going to court. The individuals are identified by their IP addresses. If the individual refuses to pay the settlement -- typically between $3,000 and $11,000 -- the RIAA threatens to sue them by name for a larger amount [source: Electronic Frontier Foundation].

Even with the RIAA's legal assault on software companies and individuals, the number of active worldwide file-sharers continues to grow. And if LimeWire gets shut down tomorrow, there are already dozens of other programs poised to take its place.

Now let's take up another important question: is LimeWire safe?