How the Mac App Store Works 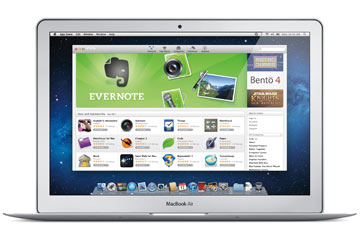 The Mac App Store as displayed on a MacBook Air.
Image courtesy of Apple, Inc.

Weren't the olden days a hassle? Say you needed the newest Call of Duty game for your Mac. You'd have to journey to a brick-and-mortar retail store and look through packages on store shelves to find it. Not in stock? Then you'd have to buy it from an online storefront and either sit through a lengthy download and manual installation process or wait for a disk to be delivered -- in seven to 10 business days.

Enter the Mac App Store. Launched in January 2011, it allows Mac users to research and download free or paid apps, right from their computer, with just a few clicks. As of August 2011, the Mac App Store was available in 90 countries and contained 21 different categories with hundreds of applications ranging from language flashcards to yoga routines.

The Mac App Store is preinstalled on Macs sold with OS X Lion (version 10.7) operating systems. Simply look for the Mac App Store icon, which is a blue circle with a white outline and an "A" in the middle.

If your Mac is running an older operating system, you may still be able to download the Mac App Store. The Mac App Store is compatible with OS X Snow Leopard (version 10.6) and available for free download when you upgrade to OS X Lion. To get the Mac App Store, click the Apple icon at the top left of the screen, then choose "software update." After a dialog box appears, click the "install" button. When the installation is complete, you will need to restart your Mac and launch the Mac App Store from the icon in your computer's dock.

The Mac App Store is modeled after other Mac apps with built-in purchase utilities, like iTunes and iBooks, through which more than 15 billion songs and 130 million books had been purchased as of June 2011 [source: Porten].

Read on to learn about a few key improvements that OS X Lion made to the Mac App Store.

Apple's Lion (v10.7) operating system, which was released in July 2011, brought some notable improvements to Mac App Store, allowing users to make in-application purchases and receive push notifications and adding an incremental update system that identifies, downloads and installs only the files that need updating, making the process faster [source: Porten]. However, the Mac App Store doesn't recognize updates for a computer's existing software apps; you'll need to re-purchase the apps from the Mac App Store to receive automatic free updates for the apps [source: Gordon].

Now that downloading and updating apps is an exclusively electronic process that doesn't require disks, packaging materials and shipping, there's less of an environmental impact. Additionally, many Mac apps sold via disk or download had limited permissions that allowed them only to be operated on a single computer. The chief way around this restriction was to buy a pricey group license. Because the Mac App Store keeps track of past purchases, users can now install apps on every Mac they own and download them again as necessary. This is especially helpful for people who buy a new Mac and want to add software that they've already purchased [source: Apple].

Ever tried to open a file and discovered you don't have the application it requires? On Macs with access to the Mac App Store, a dialog box will open and offer to search the Mac App Store for a program that will open it. If found, you can buy the app instantly [source: Luoma].

The Mac App Store offers free apps, as well as paid. On average, you can expect to pay between $15 and $80 for an app [source: Macworld]. However, there's at least one app -- the iRa Pro mobile video surveillance app -- that costs as much as $899.99.

What's the process for buying this -- or any -- app? On the next page, we offer a step-by-step guide.

Don't have a Mac? There are an increasing number of new app stores for Windows that also offer one-stop software shopping, such as Pokki and Avenue App Store [source: O'Dell]. 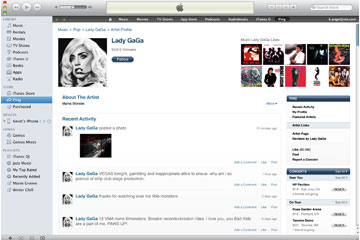 An Artist Profile page in the iTunes Store, one of the predecessors of the Mac App Store.
Image courtesy of Apple, Inc.

Apple's hardware and software is part of a closed system that makes it difficult -- and sometimes impossible -- to migrate Mac-native components and programs to PCs. However, this closed system means that Apple hardware and software are built to work together across Apple's product lines. The Mac App Store offers a chance for third-party developers to create and sell apps to all Mac users.

Developers can register for free with Apple to download a developer kit, peruse guidelines, read articles and connect with other developers. When an app is complete, it can be submitted for approval along with an icon and keyword description [source: Lewis].

Third party developers pay an annual $99 subscription fee to Apple, but being part of an audience-rich marketplace means they can avoid spending money on marketing and hosting. Developers set their own prices for apps and don't need to pay credit card fees for purchases because Apple processes the cards and pays the 2-percent to 4-percent fee. Of the retail price, Apple keeps 30 percent and the developer receives 70 percent [source: Evans].

The purchase process is a relatively simple one on the users' end. Launch the Mac App Store, select an app and click the price icon (it will either say "free" or show the purchase price). Then you will be prompted again with an icon that says "buy app," followed by a dialog box that requires your Apple ID and password to complete your purchase. You can pay using a credit or debit card, an iTunes card or a Paypal account. The app will begin downloading immediately and will be installed in your computer's Applications folder [source: Macworld].

If you'd like to know more about an app before you buy it, you can scroll through multiple screen shots. However, trial or demonstration versions aren't available, so you may have to rely on the app's user reviews to find out how the app performs. Or you can conduct research on other sites to find more objective opinions. The Apple Mac Store doesn't vet its reviews, so the opinions offer varying levels of helpfulness.

The Mac App Store offers genre categories, as well a "new and noteworthy" section that features 12 apps on the Mac App Store's launch page and a total of 40 apps under the category's own tab. These apps are chosen by Apple; there aren't any published guidelines for selection, although developers speculate it has to do with having an appealing icon and price point [source: Touch Arcade].

While the Mac App Store continues to grow, both in number of apps and users, it seems Apple is turning its attention to some of its other devices. A major iPhone hardware and software revamp is in the works, scheduled for a 2012 release [source: Luk]. It's expected to include a new way to charge the phone. If it does switch to a cable-free charging method, that may in turn influence a few positive changes in future Mac computers, just as the iPhone's App Store influenced the Mac App Store.