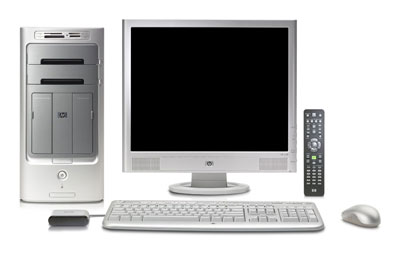 Computer manufacturers build a media-center PC from the ground up to be part of your home-theater system. You can sit on the couch in your den and send an e-mail to your friend, write up a proposal for work and set up a playlist of MP3s to blast through your surround-sound system -- all using one display, one remote and one CPU. The benefit is the simplicity. The only thing you might need to buy in addition to the PC is a TV tuner and remote, although many systems come with those in the box. Setting it up is a matter of connecting your TV and your speakers. That's it. Some units come with enough connections that you can add on an external DVD or CD player if you want to, but these PCs are really intended to serve as your all-in-one media storage and playback device -- your stereo, your DVD player, your home computer, your photo viewer, your 500-GB hard drive, your PC gaming system and your A/V receiver.

The most common systems run on Windows XP Media Center Edition (xpMCE), although lots of products run a different operating system and incorporate home-theater software (like Sage TV or Meedio Pro). Home-theater PCs are available from just about every computer manufacturer out there, and most look like regular PCs, with the CPU tower, monitor and keyboard.

Some manufacturers have adopted a more living-room-friendly form factor, like a CPU shaped more like an A/V receiver than a tower:

And then there are the real dreamers. The Elonex Lumina actually integrates the CPU into the display, so what you're putting in your living room looks like nothing more than a big flat-panel TV. But there's a whole computer inside, with PC and home-theater inputs and outputs located on the side and back of the device.

On average, you're going to be spending between $3,000 and $7,000 for a top-of-the-line system -- closer to the $7,000 if you plan to buy a fancy new flat-panel display to go with your fancy new media-center setup. One of the "ultimate" Media Center PCs from Gateway priced at about $3,000 has an Intel® Pentium® D 930 with a dual-processor core, a 500-GB hard drive, an NVIDIA® GeForce® 7800 graphics card, 24-bit DVD-Audio playback and full surround-sound support. A TV tuner costs extra. For about $6,000, the Niveus Denali Limited Edition comes with four TV tuners, a 1-terabyte hard disk and fanless cooling. The external, 200-disc CD changer costs extra.

Since the xpMCE-based system is currently the most popular rendition of the home-theater computer, we'll use it as our focus. You'll see xpMCE systems referred to specifically as "Media Center PCs," although other systems may use the same name in generic form. In this article, where "Media Center" is capitalized, we're talking about a computer running Windows XP Media Center Edition.

A Media Center PC can do all of the things a regular Windows XP-based system can do in addition to the home-theater functions. In the next section, we'll find out what this type of system can do for you and what it takes to set it up.

Apple's newer iMacs, while not marketed as "media centers," have a lot of the features you'll find on a media-center PC. All 2006 iMacs come with Front Row software that lets you view your photos and DVDs and browse your music collection in a widescreen "theater" view, and you can connect your TV as the computer display. The Apple remote lets you navigate from across the room, too. See Apple: iMac to learn more.