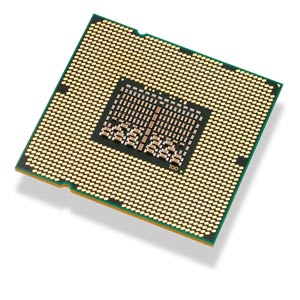 The back side of the Core i7 chip with Nehalem microarchitecture.
Courtesy Intel

As software applications become more sophisticated, sending instructions to processors becomes complicated. One way to simplify the process is through threading. Threading starts on the software side of the equation. Programmers build applications with instructions that processors can split into multiple streams or threads. Processors can work on individual threads of instructions, teaming up to complete a task. In the world of microprocessors, this is called parallelism because multiple processors work on parallel threads of data at the same time.­

Another benefit to multithreading is that the processor can handle multiple applications at the same time. This lets you work on complex programs while running other applications like virus scanners in the background. With older processors, these activities could cause a computer to slow down or even crash.

Intel has incorporated an additional technology the company calls turbo boost within Nehalem's architecture. If the processor is running below its limits on power consumption, processing capacity and temperature levels, it can increase its clock frequency. This makes the active processors work faster. With older applications that have a single thread, the chip can increase clock speeds even more.

The turbo boost feature is dynamic -- it makes the Nehalem microprocessor work harder as the workload increases, provided the chip is within its operating parameters. As workload decreases, the microprocessor can work at its normal clock frequency. Because the microchip has a monitoring system, you don't have to worry about the chip overheating or working beyond its capacity. And when you aren't placing heavy demands on your processor, the chip conserves power.

If Nehalem is Intel's latest "tock," what will be the next "tick?" And what comes after that? Find out in the next section.

Rock Around the Overclock

Nehalem's turbo boost feature is similar to an old hacking trick called overclocking. To overclock a microprocessor is to increase its processing frequency beyond the normal parameters of the chip. Some gamers overclock the processors on their machines to get better performance when playing sophisticated video games. But overclocking isn't always a good idea -- it can cause chips to overheat.