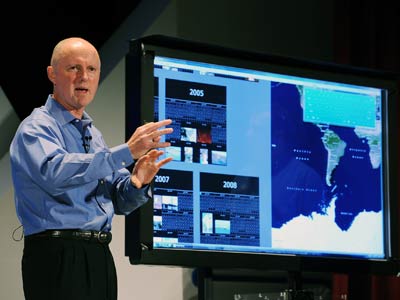 Developing a microprocessor takes years. While Intel unveiled Nehalem in 2008, the project was more than five years old at the time. That means even as people wait for an announced microchip to make its way into various electronic devices and computers, manufacturers like Intel are working on the next step in microprocessor evolution. They have to, if they want to keep up with Moore's Law.

The next step for Intel is another "tick" development. That means reducing transistors down to 32 nanometers wide. Producing one microprocessor with transistors that size is an amazing achievement. But what's even more daunting is finding a way to mass produce millions of chips with transistors that small in an efficient, reliable and cost-effective way.

The codename for the next Intel chip is Westmere. Westmere will use the same microarchitecture as Nehalem but will have the 32-nanometer transistors. That means Westmere will be more powerful than Nehalem. But that doesn't mean Westmere's architecture will make the most sense for a microprocessor with transistors that small. That will fall to the next "tock" microprocessor.

And the tock already has a name: Sandy Bridge. The Sandy Bridge microchip will have an architecture optimized for 32-nanometer transistors. It may take a couple of years before we see Sandy Bridge rolled out into the commercial market, but when it does it will likely be just as revolutionary as Nehalem is today.

Where will Intel go after that? It's hard to say. While transistors have shrunk down to sizes practically unimaginable a decade ago, we're getting close to hitting some fundamental laws of physics that could put a halt to rapid development. That's because as you work with smaller materials, you begin to enter the realm of quantum mechanics. The world of quantum mechanics can seem strange to someone only familiar with classic physics. Particles and energy behave in ways that seem counterintuitive from a classic perspective.

One of those behaviors is particularly problematic when it comes to microprocessors: electron tunneling. Normally, transistors can funnel electrons without much risk of leakage. But as barriers get thinner, the possibility for electron tunneling becomes more likely. When an electron encounters a very thin barrier -- something on the order of a single nanometer in width -- it can pass from one side of the barrier to the other even if the electron's energy levels seem too low for that to happen normally. Scientists call the phenomenon tunneling even though the electron doesn't make a physical hole in the barrier.

Still, engineers tend to think of ways around problems that seem completely insurmountable. Even if transistors can't get any smaller after one or two more generations, it won't be the end of electronics. It just might mean we advance a little more slowly than we're accustomed to.

To learn more about microprocessors and related subjects, take a look at the links below.