Browse the article Passwords Sent Securely Through Your Body, Not the Air 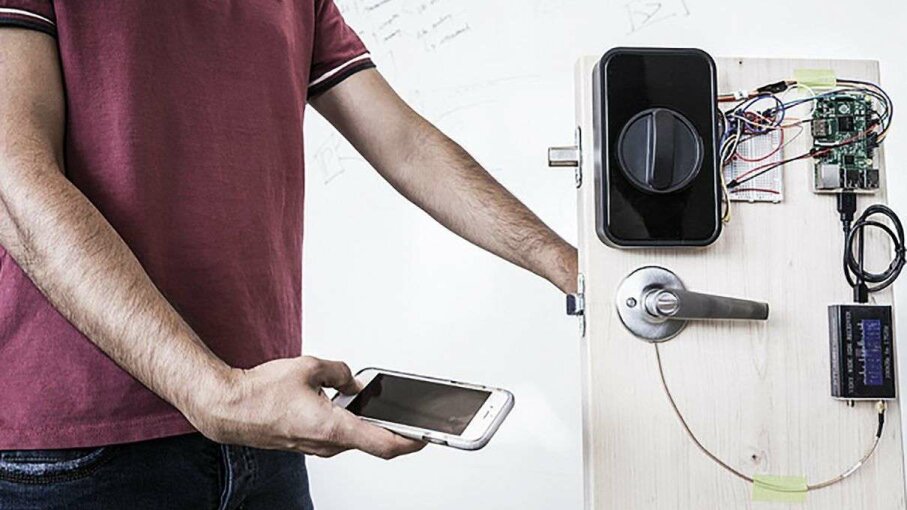 In recent years, our technologically-advanced society has been shifting from mechanical to electronic locks, which increasingly are found on the doors of both businesses and private homes. It's already possible, in fact, to use an app on your smartphone to automatically unlock your house or office, sparing you from setting down an armful of packages to punch in a code.

That all sounds really convenient, and you might think that an electronic lock would be impervious to burglars, since there'd be no mechanical mechanism for them to crack with their set of picks.

But security experts say that's a false sense of security. Criminals are getting more tech-savvy, too, and ones equipped with the right gadgetry can intercept the signals from the WiFi or Bluetooth transmissions that you'd use to open the lock. If they're able to break the encryption and steal the password, you might as well invite them inside.

Fortunately, though, University of Washington researchers may have come up with a clever way to thwart such hackers. A recent paper describes how you could use your own body to transmit a low-frequency signal — generated by a smartphone's fingerprint scanner — to open a lock from close up, but which would degrade over a longer distance, so that hackers wouldn't be able to pick it up.

All you would need it to be carrying a phone or some other electronic gadget that contains the code to open the door. Instead of transmitting a signal directly to the lock's receiver though a hackable technology like WiFi or Bluetooth, your phone would send the signal through your body.

"I can touch the doorknob and touch the fingerprint sensor on my phone and transmit my secret credentials through my body to open the door," paper co-author and UW electrical engineering doctoral student Mehrdad Hessar says in a press release, "without leaking that personal information over the air."

But the new technology doesn't necessarily even require a phone. The researchers say you could have some other sort of electronic gadget in your pocket, around your wrist or on a necklace that would do the trick.

Potential applications for on-body transmissions include securely sending information to door locks, glucose sensors or other wearable medical devices.
Vikram Iyer/University of Washington
Now That's Scary
Thieves apparently have figured out how to amplify the radio signal given off by a car's remote entry system when it is parked outside the owner's house, so that the owner's own key fob will unlock the car door; Swiss researchers also demonstrated that it actually was possible to start the ignition and drive away in the car as well, though fortunately, there seem to be no confirmed reports of that actually happening.