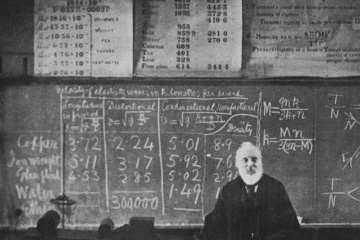 Scottish mathematician and physicist William Thomson, Lord Kelvin, was working on the precursor to the inkjet printer in the 1860s.
© Universal History Archive/Getty Images

Although there were commercial and industrial printers for use with large, expensive computers for decades beforehand, the golden age of the printer really began when personal computers entered the market in the 1970s and 1980s. Computers were coming into the typical office and even the home, and other peripherals, including printers, were developed to use right alongside them.

Most of the early printers for personal computers were very noisy impact printers, including dot-matrix and daisy-wheel, both introduced in the early 1970s. The former type drove print head pins into an ink-infused ribbon to get ink onto the page, and the latter drove a wheel of pre-formed typewriterlike characters into the ribbon. But in the mid-1980s, consumer inkjet and laser printers were introduced nearly simultaneously, and they eventually took over a large percentage of the printer market.

Inkjet printers were under development in one form or another for almost a century before they actually came out. Around 1867, a patent was granted to William Thomson (aka Lord Kelvin) for a device that would have used electrostatic technology to print telegraph messages using ink droplets on a continuous roll of paper tape. Siemens released the first continuous inkjet printer in 1951 for use in medical records coding, and continuous inkjet printers are still used for commercial purposes.

Breakthroughs in drop-on-demand inkjet technology, however, made the devices viable for home and small office use. In the 1970s, companies were researching piezoelectric methods for accurately releasing ink onto paper in precise droplets, and Canon and Hewlett-Packard began independently working on methods to do the same using heat instead. The research also extended to development of inks that could withstand heat and light, would properly adhere to the paper and would dry quickly, among other traits.

Hewlett-Packard introduced the ThinkJet inkjet printer to the market in 1984, which used disposable cartridges full of ink, replacing their earlier serial dot-matrix printers. Canon released the BJ-80 inkjet printer (using what they called Bubble Jet technology) in 1985. Epson released the SQ-2000 printer (called IP-130K in Japan), which used piezoelectric rather than thermal technology, in 1984. They were all monochrome printers, which used a single shade of black ink.

Inkjet's cousin, the laser printer, had its roots in a copier machine technology called electrophotography, or xerography, which involved electrical charges, light and powdered toner (rather than liquid ink). The method was invented by Chester Carlson in 1938 and was first used in the Xerox 914 copier in 1959. The first laser printer was released by IBM in 1975 and worked with their mainframe computers. Hewlett-Packard released its LaserJet printer in 1984. Early laser printers had much better resolution than their inkjet counterparts and sold better.

Other types of printers were in the works around the same time as drop-on-demand inkjet printers and laser printers, and some came to fruition and are still in use for various purposes. Thermal transfer printers use heating pins to melt a solid waxlike ink housed on a ribbon or in sticks onto paper. Dye-sublimation printers transfer ink from a printed roll of film to another material by heating the ink so that it turns directly into a gas. And some other thermal printers burn dots onto special paper that changes color with the heat (requiring no ink at all). There are even still dot-matrix and daisy-wheel printers in use in some industries for things like check and invoice printing.

But inkjet printers caught up with and surpassed all other types, even laser printers, starting in the mid-1990s when color inkjet cartridges were added because of their lower cost, ever improving resolution and ability to print in vivid color.

About 90 percent of the inkjet printers sold globally in 2014 were still made by pioneers Canon, Epson and Hewlett-Packard. They aren't the only game in town, however, with Brother, Samsung and others producing them as well. Lexmark and Kodak both stopped selling printers in 2012 [source: Collinson].