Why are the keys arranged the way they are on a QWERTY keyboard? 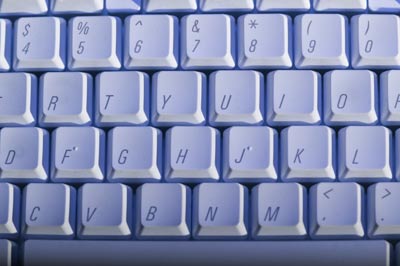 The QWERTY layout is based on the keyboard design for the original typewriter.
Photodisc/Getty Images

In 1874 Remington & Sons manufactured the first commercial typewriter, called the Remington Number 1. This typewriter was designed by Christopher Sholes and used the "QWERTY" keyboard we are all familiar with.

This early typewriter used a mechanism with characters on the end of a bar. When a key was struck, a linkage would swing the bar into a tape coated with ink. When the character struck the tape, the impression of the character was transferred onto the paper, which was positioned behind the tape.

Sholes' original prototypes had a problem with the bars colliding with each other and jamming. So the story goes that he arranged the keys with the most common letters in hard to reach spots, to slow typists down and try to avoid this problem.

The Dvorak layout places all of the most commonly used letters in the home row so your fingers don't have to move at all to hit these keys. The left hand has all of the vowels and some consonants and the right hand has only consonants. So there are very few words in the English language that can be typed with only one hand on the Dvorak keyboard (two are "papaya" and "opaque"). Both "pumpkin" and "minimum" can be typed with one hand on a QWERTY keyboard -- give it a try.

This site shows the layout of the Dvorak keyboard. If I had typed this article on a Dvorak keyboard, my fingers would have traveled 30 meters versus the 54 meters they traveled on the QWERTY keyboard I use.

Some argue, however, the Dvorak keyboard is no more efficient than QWERTY. An independent study in 1956 showed that QWERTY typists and Dvorak typists had about the same rate of speed, and continued studies don't show a clear winner between the two [ref]. This may explain why QWERTY is still the standard.

If you want to see for yourself, you can switch your keyboard to a Dvorak configuration just by changing a setting on your computer's operating system. Depending on your keyboard, you may even be able to pry off the keys and rearrange them in the Dvorak layout.

For more information on keyboards and related topics, check out the links on the next page.