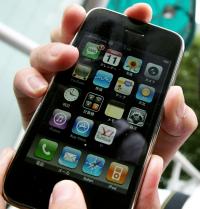 Touch-screen monitors have become more and more commonplace as their price has steadily dropped over the past decade. There are three basic systems that are used to recognize a person's touch:

The resistive system consists of a normal glass panel that is covered with a conductive and a resistive metallic layer. These two layers are held apart by spacers, and a scratch-resistant layer is placed on top of the whole setup. An electrical current runs through the two layers while the monitor is operational. When a user touches the screen, the two layers make contact in that exact spot. The change in the electrical field is noted and the coordinates of the point of contact are calculated by the computer. Once the coordinates are known, a special driver translates the touch into something that the operating system can understand, much as a computer mouse driver translates a mouse's movements into a click or a drag.

On the monitor of a surface acoustic wave system, two transducers (one receiving and one sending) are placed along the x and y axes of the monitor's glass plate. Also placed on the glass are reflectors -- they reflect an electrical signal sent from one transducer to the other. The receiving transducer is able to tell if the wave has been disturbed by a touch event at any instant, and can locate it accordingly. The wave setup has no metallic layers on the screen, allowing for 100-percent light throughput and perfect image clarity. This makes the surface acoustic wave system best for displaying detailed graphics (both other systems have significant degradation in clarity).

Another area in which the systems differ is in which stimuli will register as a touch event. A resistive system registers a touch as long as the two layers make contact, which means that it doesn't matter if you touch it with your finger or a rubber ball. A capacitive system, on the other hand, must have a conductive input, usually your finger, in order to register a touch. The surface acoustic wave system works much like the resistive system, allowing a touch with almost any object -- except hard and small objects like a pen tip.

As far as price, the resistive system is the cheapest; its clarity is the lowest of the three, and its layers can be damaged by sharp objects. The surface acoustic wave setup is usually the most expensive.

See the next page to learn more.

How Printer Ink Works
How does your computer know how much ink is left in the cartridge?
How Transmissive Film Works