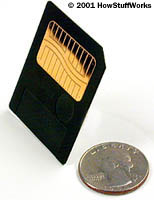 A SmartMedia card measures about twice the surface area of a quarter.

CompactFlash consists of a small circuit board with Flash-memory chips and a dedicated controller chip, all encased in a rugged shell that is several times thicker than a SmartMedia card. The increased thickness of the card allows for greater storage capacity.

CompactFlash sizes range from 8 MB to an incredible 4 GB. The onboard controller can increase performance, particularly on devices that have slow processors. However, the case and controller chip add size, weight and complexity to the CompactFlash card when compared to the SmartMedia card.

The solid-state floppy-disk card (SSFDC), better known as SmartMedia, was originally developed by Toshiba. SmartMedia cards are available in capacities ranging from 2 MB to 128 MB. As seen below, the card itself is quite small.

SmartMedia cards are capable of fast, reliable performance while allowing you to specify the data you wish to keep. They are small, lightweight and easy to use. They are less rugged than other forms of removable solid-state storage, so you should be very careful when handling and storing them. Check out How Flash Memory Works for more information.