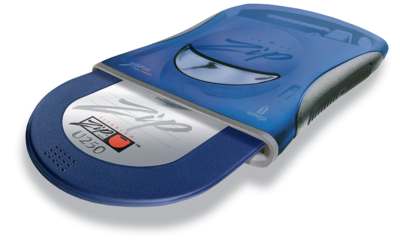 Over the years, magnetic technology has improved greatly. Because of the immense popularity and low cost of floppy disks, higher-capacity removable storage has not been able to completely replace the floppy drive. But there are a number of alternatives that have become very popular in their own right. One such example is the Zip from Iomega.

The main thing that separates a Zip disk from a floppy disk is the magnetic coating used. On a Zip disk, the coating is of a much higher quality. The higher-quality coating means that the read/write head on a Zip disk can be significantly smaller than on a floppy disk (by a factor of 10 or so). The smaller head, in conjunction with a head-positioning mechanism that is similar to the one used in a hard disk, means that a Zip drive can pack thousands of tracks per inch on the disk surface. Zip drives also use a variable number of sectors per track to make the best use of disk space. All of these features combine to create a floppy disk that holds a huge amount of data -- up to 750 MB at the moment.