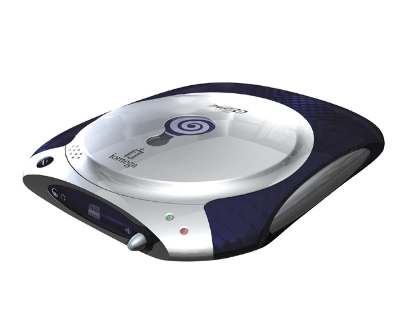 The Predator is a fast CD-RW drive from Iomega.
Photo courtesy Iomega Corporation

That is how a normal CD works, which is great for prepackaged software, but no help at all as removable storage for your own files. That's where CD-recordable (CD-R) and CD-rewritable (CD-RW) come in.

CD-R works by replacing the aluminum layer in a normal CD with an organic dye compound. This compound is normally reflective, but when the laser focuses on a spot and heats it to a certain temperature, it "burns" the dye, causing it to darken. When you want to retrieve the data you wrote to the CD-R, the laser moves back over the disc and thinks that each burnt spot is a bump. The problem with this approach is that you can only write data to a CD-R once. After the dye has been burned in a spot, it cannot be changed back.

CD-RW fixes this problem by using phase change, which relies on a very special mixture of antimony, indium, silver and tellurium. This particular compound has an amazing property: When heated to one temperature, it crystallizes as it cools and becomes very reflective; when heated to another, higher temperature, the compound does not crystallize when it cools and so becomes dull in appearance.

CD-RW drives have three laser settings to make use of this property:

Other optical devices that deviate from the CD standard, such as DVD, employ approaches comparable to CD-R and CD-RW. An older, hybrid technology called magneto-optical (MO) is seldom used anymore. MO uses a laser to heat the surface of the media. Once the surface reaches a particular temperature, a magnetic head moves across the media, changing the polarity of the particles as needed.