How Solid-state Drives Save Data 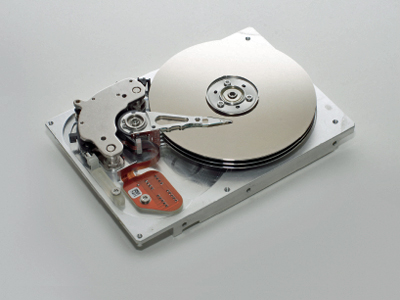 In this picture, it's easy to see this hard drive's platters, which look a bit like CDs stacked one on top of another, and an actuator arm.
©iStockphoto.com/jpa1999

On the outside, solid-state drives look just like HDDs. They're rectangular in shape, covered in a brushed-metal shell and sized to match industry-standard form factors for hard drives -- typically 2.5 and 3.5 inches (6.4 and 8.9 centimeters). But beneath the silver exterior, you'll find an array of chips organized on a board, with no magnetic or optical media in sight. Much of that stuff could fit into a smaller space, but SSD manufacturers dress up their components in extra "housing" to make sure they fit into existing drive slots of laptops and desktop PCs.

Compared to the stark simplicity of a solid-state drive, the innards of a hard drive are a marvel of motion, sound and activity. Round platters, arranged on a spindle, can spin at 7,200 revolutions per minute. An actuator arm, branching into multiple read-write heads, races across the platters in too-fast-to-be-seen bursts of speed. The arm connects to the actuator block, which holds the instructions for moving the read-write heads. As those instructions are called up, sometimes up to 50 times a second, the arm pivots at one end and moves the heads in unison over the platters. Once a head arrives at a certain location on a platter, an electromagnet produces a magnetic field, which aligns data-carrying domains in the underlying track. Each domain can be aligned in one of two possible directions -- 1 or 0. As these alignments change, they form patterns that correspond to discrete chunks of digital information.

The NAND flash of a solid-state drive stores data differently. Recall that NAND flash has transistors arranged in a grid with columns and rows. If a chain of transistors conducts current, it has the value of 1. If it doesn't conduct current, it's 0. At first, all transistors are set to 1. But when a save operation begins, current is blocked to some transistors, turning them to 0. This occurs because of how transistors are arranged. At each intersection of column and row, two transistors form a cell. One of the transistors is known as a control gate, the other as a floating gate. When current reaches the control gate, electrons flow onto the floating gate, creating a net positive charge that interrupts current flow. By applying precise voltages to the transistors, a unique pattern of 1s and 0s emerges.

NAND flash comes in two flavors based on how many 1s and 0s can be stored in each cell. Single-level cell (SLC) NAND stores one bit -- either a 1 or a 0 -- per cell. Multi-level cell (MLC) NAND stores two bits per cell. MLC flash delivers higher capacity, but it wears out more quickly (yes, wears out -- we'll cover that more in a couple of pages). Still, it's less expensive per gigabyte than SLC and, as a result, is the preferred technology in almost all consumer-level SSDs.

Cost has been one of the biggest hurdles of flash memory and, consequently, of solid-state drives. But in recent years, costs have dropped significantly. At the same time, advances in NAND flash development have taken what's good about the technology and made it even better. Up next, we'll look at the advantages of solid-state drives.

Should I move my hard disk to the cloud?