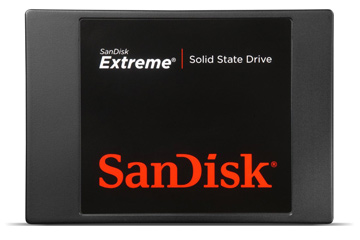 This 480-gigabyte solid-state drive made by SanDisk was retailing for $372.91 (on sale) when we last checked on Amazon. List price was $699.99.
Image courtesy Amazon.com

You've invested in a top-of-the-line laptop with a 500-gigabyte hard drive, and it's working great. You've got all your photos and videos, your entire music library, five half-finished novels and applications galore packed onto the drive's platters. Why would you consider swapping the HDD for a solid-state drive? Didn't Dad always say, "If it ain't broke, don't fix it"?

Maybe Dad didn't own any hard drives. The harsh reality is that HDDs can and do fail, often more frequently than their technical specs would seem to suggest. For example, hard drive manufacturers rate the reliability of their products using a measurement known as mean time between failures, or MTBF. A typical consumer hard drive has a MTBF rating of 500,000 hours, meaning that, in a sample of drives tested, there would be one failure every 500,000 hours of testing. That's one failure every 57 years, which sounds pretty good, right? Unfortunately, MTBF scores are misleading. They come from a statistical evaluation based on a small sample size and a short amount of time. In reality, you'd also want to consider a typical HDD's warranty and service life (three to five years or so), along with the MTBF score. Because they have no moving parts, SSDs can deliver improved reliability. They can rate up to 2.5 million hours MTBF, which probably means a few more years added to the lifespan of the device.

An even bigger deal is the performance of solid-state drives compared to HDDs. With no moving heads and spinning platters, SSDs can access one piece of data as quickly as any other piece, even if they aren't in the same proximity. The speediness of the device manifests itself in all key CPU tasks, from booting up system software to opening files to reading and writing data. The following bullets compare SSDs and HDDs on these critical activities:

All of this adds up. Even a casual user will notice a significant increase in the performance of a computer equipped with an SSD. But a power user will really feel the difference. Game designers, animators and other folks rendering huge output files were early adopters of SSDs just because of the cumulative time they could save reading and writing large files. Today, gamers, photographers and anyone editing graphics or video files will appreciate the boost in speed a solid-state drive delivers.

Finally, SSDs consume far less power than traditional hard drives, which means they preserve battery life and stay cooler. They're also super quiet, with none of the whirring and clicking you get with HDDs. You'll appreciate this more if you're a frequent traveler and often have your computer perched on your knees, but even if your laptop remains docked most of the time, a cooler, quieter machine can make a noticeable difference in the comfort of your workspace.

Of course, no technology is perfect, and SSDs are far from it. On the next page, we'll examine the negatives of NAND flash and why a combination of technologies may be the best solution.

Should I move my hard disk to the cloud?