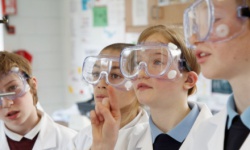 Compared with mastering multiplication tables, struggling with Shakespeare or memorizing a slew of dates, science class has always been pretty lively. After all, where else could you play with volatile chemicals, fire, magnets and even the occasional dead frog (OK, so maybe that part wasn't "play" for everyone).

Now, thanks to some very smart people who paid attention during science class (and a few other periods), we have another way to study science: the iPad. In just a few short years, this ubiquitous tablet has proved its versatility and usefulness in all sorts of ways. Perhaps most valuable among these is education. Science apps written for the iPad let us explore space, look inside the human body, test out theories and yes, even dissect a frog (although with much less mess). Science itself has made educating people about it more fun and interactive than ever.

Here we present 10 iPad science apps that are so engaging and entertaining that kids won't even mind that they're learning while using them.