Browse the article 10 iPad Apps for Teaching Kids to Read 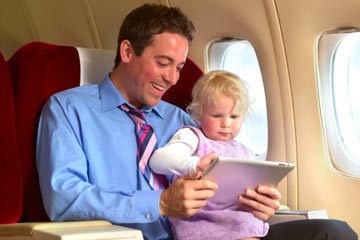 Rather than making flashcards like their parents' generation, children now have access to digital technology that can help them learn language.
Peter Dazeley/Stock Image/Getty Images

Whether it's the pervasiveness of smartphones and tablet PCs or the instinctive appeal of their touch screen interfaces, there's no doubt that smartphone technology is changing the way that children gather and organize information. In fact, a study conducted by PBS through a grant from the Department of Education found that the use of educational iPhone apps increased children's vocabulary acquisition by 31 percent within a span of just two weeks [Source: Bell]. Similarly, the iPad, introduced by Apple in 2010, has the potential to revolutionize the way that children learn.

Rather than copying handwriting exercises and making flashcards like their parents' generation, children now have access to digital technology that can help them learn language. The market for children's reading apps has not escaped app designers. In fact, app makers are marketing to parents who want to give their children a head start on learning. Toys "R" Us sells the iPad, and PCWorld even named the iPad the best toy of the year for young children in 2010.

Although some parents might cringe at the thought of teaching their kids with an iPad rather than good old-fashioned paper and pencil, the iPad does offer several advantages over books and even computers and smartphones. The iPad can store multiple apps for reading and thus provide numerous levels of exercises as your child develops his or her reading skills. An iPad has a larger screen than a smartphone, allowing for a larger range of motion when tracing letters to practice handwriting. Yet, its size and portability makes it easier to transport than a laptop or desktop computer. Perhaps most importantly, it will prepare your child for an increasingly technologically connected world. In this article, we'll take a look at 10 iPad apps for teaching kids to read.

Priced at $2.99, abc PocketPhonics teaches children more than 170 frequently used words. This app plays a recording of a letter and then asks the child to find the letter out of a group of about eight letters. When the child selects the correct letter, he or she receives a thumbs up and moves on. Another letter is pronounced, and your child eventually builds a word. Additionally, abc PocketPhonics demonstrates how to write each letter by allowing children to trace the letter with their fingers.

This app is best suited for beginner readers in pre-school and kindergarten. It includes a Parentzone section that links parents with more tools to teach children how to read.

Reading For Kids: 100 Ways to Encourage Your Child to Read

This free iPad app provides 100 resources for parents who want to encourage their children to become life-long readers. It describes engaging ways to make reading fun and exciting for young learners.

Ideas provided by the app range from planning a trip to the library to get your child’s first library card to developing fun reading blogs and Web sites about reading. The app also suggests book- and reading-related craft projects such as making bookmarks. Reading for Kids even gives advice about where to store books so that your children have easy access to them. One of the great things about this app is that its resources can be used with children of all ages.

Who's Really Using the iPad?

A recent study by AOL News found that 81 percent of book apps on the iPad are children's titles [Source: Crowe].

Word Magic is a spelling app that shows kids a picture of an object and gives them some of the letters of the word for it. They have to choose the letters that are missing by touching the screen. Based on the child's level, the missing letters can come from the beginning, middle or end of the word. For example, you might set the app to display one missing letter at the beginning of a word for a 3 year old, while you could challenge a 6 year old to find two missing letters in the middle of a longer word. After five correct answers, different colored stars appear as a reward and a voice recording congratulates the child. Priced at $.99, Word Magic gives you a lot of bang for your buck by both helping to build spelling skills and developing vocabulary.

Although iPads are great learning devices for all children, they have a special potential to assist children with learning differences. Because the iPad does not necessarily involve interaction with a teacher or parent, it provides a less stressful learning environment for children with autism, as well as those who are nonverbal or struggle with other special learning needs.

Grace, an app designed by a mother of two autistic children, helps with sentence building by providing relevant images to form sentences. Children select eight cards to build a sentence. The app comes with a set of basic pictures, but you can also customize the photos and images that are used to build sentences. As children practice building sentences with this app, they can attempt to vocalize the sentences with the knowledge that they have the pictures for backup. Even though it is a pricier app at $37.99, the cost is well worth it: This app has the potential to enhance the learning experience of a child who might otherwise struggle with reading skills. 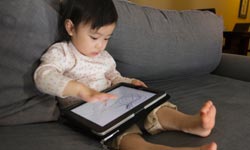 Priced at $2.99, iWrite Words focuses on handwriting and writing words. Once a child has written all of the letters in a line correctly, a drawing appears. The child then slides the letters onto a rotating hole to get to the next level. The app offers 70 levels of both upper and lowercase letters, 20 levels of numbers and 26 levels of individual letter tracing for both upper and lowercase letters. It also allows you to play the ABC song and play back the words that your child has written in his or her own handwriting. If you want to test the app before purchasing it, a lite free version is available for download.

Most of us remember studying new vocabulary words by cranking out hundreds of flashcards over the span of our school years. With the Learn to Read! app, the days of time-consuming and laborious flashcard making are over. This app, costing $1.99, is a technologically advanced spin on traditional flashcards. Frequently used words on flashcards appear on the screen while a voice recording pronounces the word.

Learn to Read! is equipped with the Dolch Word List, a group of sight words commonly used in the English language. They include parts of speech such as pronouns, adverbs, prepositions, adjectives, conjunctions and verbs that are difficult to learn through the use of pictures and have to be acquired though memorization and recognition. This app is best suited for children from pre-school to second grade, and multiple levels of word difficulty are available.

The lowest age rating that Apple uses is 4+, but many apps are geared toward toddlers. When choosing an app, consider whether it is age appropriate and whether your child will actually have fun playing with it.

ABC Phonics Animals offers several sections of activities to teach kids phonics while learning to identify animals. In the flashcards section, the app displays flashcards of a cartoon animal along with the spelling of its name. A voice recording says the sound of each letter, and the child has to touch the letter that has just been spoken. In the animal match section, children identify a cartoon animal from a choice of three words. In the balloon pop section, a voice on the app says a letter that is used in the name of the animal, and the child has to touch the corresponding letter on the screen. A balloon makes a fun popping noise when the correct selection is made.

Although the app costs $1.99, a free lite version is also available. One caveat: You might want to give your kid headphones with this app as the carnival-like sounds could become annoying.

Rock 'n Learn Phonics Easy Reader, priced at $1.99, helps children develop their reading skills through three phonics stories. The stories can be read to the child or she can sound out the words and read the story. If the child needs some extra help with figuring out a word, she can click on the word for assistance. Rock 'n Learn Phonics Easy Reader focuses on developing pronunciation of short vowel sounds, consonant-vowel-consonant combinations and words ending with ll, ss, ff, s, and plural s.

In the Read to Me section, a story is read aloud to the child. As the story is read, words are highlighted on the screen so that kids can read along. In the Let Me Try section, kids read the story for themselves. If they have trouble with a word, they can touch the screen to hear it pronounced. They can play back the story to check how accurate they were after reading each sentence.

The Monster at the End of This Book

This is a high-tech update of the original 1971 hardcover published by Golden Books. Sesame Street's Grover reads the title of the book and instantly becomes frightened about discovering the monster at the end of the story. The book is narrated by Grover, and the words are highlighted on the page so that children can follow along. As the book continues, Grover becomes more and more anxious about finding the monster, and he presents barriers to keep you from turning the page. To get through the barriers, children have to tap the barrier on the page or tickle Grover. This app, costing $3.99, is particularly fun for kids because they feel that they are interacting with Grover and playing a part in the completion of the story while they are learning reading and listening skills. It also offers parents suggestions about questions to ask children as they read the story. 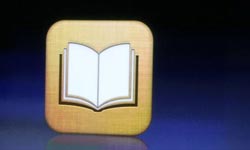 iBook is a free app that allows you to download and read books from the iBookstore, which features everything from contemporary bestsellers to classics. Although this is a free app, some of the books available for download require a fee.

To use the app, first download a book from the iBookstore. Then tap the book to open it, and flip through pages with a tap or swipe. You also can bookmark pages, add notes to passages, change font sizes and select from six typesettings. Before you download a book, you can read a sample selection.

The latest version of the iBook is particularly great for children because it offers a read-aloud feature in which a narrator reads the book to you. For some books, the screen highlights words as you read along.