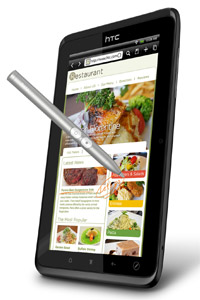 Users can make notations on Web pages with the Flyer/EVO View's stylus.
Image courtesy of HTC.

HTC tablets are designed to appeal to a variety of users and encourage them to interact with what they're reading or creating. The HTC Flyer and EVO View come with a stylus that can be used to select and navigate apps.

Critics contend the stylus is an outdated tool -- one most people gave up after the demise of handheld personal digital assistants in the '90s. However, proponents believe the stylus is a helpful tool, particularly because of the tablets' software and apps that accept handwritten notes. Users can create drawings, sign documents and save notes on Web pages, electronic books and PDF files [source: Design Boom]. They can even draw on photos taken with the Flyer/EVO View cameras. The devices have 5-megapixel rear-facing cameras and 1.3-megapixel front-facing cameras for still photography and video chats [source: Perlman].

When the HTC tablets first hit the market, the cost of the stylus pen was a sticking point for some buyers. It was free with the EVO View but cost about $80 for those buying a Flyer. Beginning in July 2011, though, the stylus was packaged with the Flyer for free in some retail stores [source: Wagner].

The Flyer and EVO View models both have dual built-in cameras -- 5 megapixel on the back of the device and 1.3 megapixel on the front -- that can capture still frames or video. When it comes to picture power, HTC tablets outgun Apple's iPad, which comes with a less than 1-megapixel camera. The Flyer/EVO View's battery is larger than that of most other tablets, too. The 4,000-milliamp hours (mAh) battery can last seven hours or more [source: Stern].

HTC's upcoming tablet, known internally by the code name "Puccini," will be sold exclusively by AT&T as part of its Long-Term EVOlution (LTE) 4G network, a wireless infrastructure that promises faster data speeds [source: Selleck, Bookwalter]. The 10-inch (25.4-centimeter) Jetstream tablet will be larger than the 7-inch (17.78-centimeter) Flyer and EVO View, but is still expected to offer a similar stylus and touch-screen interface [source: Blass]. And, unlike the Flyer and EVO View, the Jetstream will run on Android 3.0 (Honeycomb) operating system, which has been designed specially for tablets -- something buyers are sure to appreciate [source: Samuel].