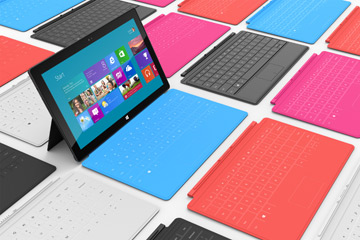 You can get two different types of keyboards in a variety of colors. They attach to the Surface with magnets.
Used with permission from Microsoft

Both versions of the Surface have a spot along the case where a cover can snap into place using magnets. The cover acts as a screen protector, although the Surface has Corning's scratch-resistant Gorilla Glass. Microsoft added an extra bonus with the cover: When open, it can also serve as a keyboard.

There are two flavors of keyboard -- Touch Cover and Type Cover. The Touch Cover keyboards are flat with pressure-sensitive keys. The Type Cover keyboard has physical, raised keys that click when you type on them. Both connect physically to the Surface with magnets and use Bluetooth to communicate with the device.

At the unveiling event, Microsoft representatives said that aesthetic design was an important consideration in the Surface's construction. That might explain why the company will offer different color covers when the Surface hits stores later in 2012.

The Windows 8 Pro model of the Surface will have another input device option: a stylus. The stylus will also attach to the Surface with a magnet. You can use the stylus to draw and write within various applications on the tablet. There's also a feature called Palm Block that detects when the stylus is near the screen. Whenever the Surface detects the stylus, it modifies how the capacitive screen works. It will only respond to the touch of the stylus. That way, the Surface won't start scrolling, zooming or otherwise activating commands as your hands move on the screen while you try to write or draw.

Because both versions of the Surface have a USB port -- 2.0 in the consumer version and 3.0 in the Windows 8 Pro version -- you'll be able to attach other peripherals to the tablet easily. This could include anything from additional speakers and microphones to a printer. You could also use the tablet to charge other devices over USB if you wanted to.