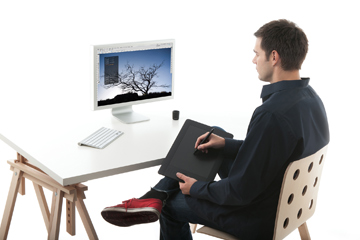 Let's get our definitions straight here, folks: Unlike the iPad, the Kindle Fire or the Nook, Wacom tablets are not your average tablet PCs. Nor do they strive to be -- they're graphics tablets (also called pen tablets), devices generally used in the graphic design industry or by digital artists that allow a person to draw by hand, capturing an image or graphic in digital form. The information is displayed on the monitor of a connected PC or Mac.

Sounds a little complicated, but imagine this: You're working at your computer when the fancy strikes you to doodle a picture of a cartoon chicken eating broccoli. (Doodles don't have to make sense.) You use the pen and paper next to you. After sitting there for a day or so, it's absent-mindedly put in the trash, only to decompose slowly in a landfill, your artistic genius never recognized.

Unacceptable. Wacom tablets, which comprise many different models that we'll detail in this article, are designed so you can digitally doodle straight into your computer (among far more important tasks). Basically, they're the technological mating of a computer mouse with a pencil and a computer monitor with a college-ruled notebook.

Not a perfect analogy. But graphic designers, artists, illustrators and many other hobbyists and professionals need a device that allows their hand-drawn work to be digitized or their digital image to be manipulated with an old-fashioned hand. The technology powering Wacom tablets provides a few advantages over click-and-point navigation. The pen, or stylus, that comes with the tablets can communicate much more effectively. Its pressure-sensitive system will let you determine things like how thick or thin a line should be, and it can instantly capture handwritten notations. The tablet communicates with the pen, plotting its location in microseconds as it makes your adjustments on screen.

Graphic designers could benefit from the ease of turning concepts into digital reality. A photographer might like to be able to manipulate an image by hand more carefully. And pretty much everyone thinks it's cool to have their hand-written notes or doodles appear on their computer in the time it takes to put pen to paper. 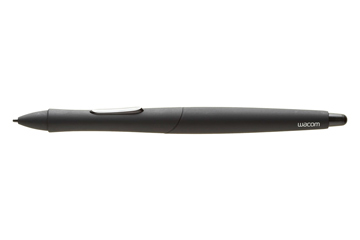 This one's the classic version, but Wacom's digital pens come in a variety of colors and have different features.
Courtesy Wacom Europe

Unlike an iPad-like tablet, Wacom offers several different lines and models. Let's first take a look at the technology and hardware that's common to all of the tablets to grasp exactly how a Wacom tablet functions.

We really have to start with the pen; Wacom refers to the pen's system as Penabled Technology. Sure, it looks like a regular pen but inside lurks a digital chip, a modulator and a transmitter. All of those components work in a complicated manner, but we can break it down: The tip of the pen tells the tablet what to do. And it's done with magnets! Well, not exactly. The sensor board of the tablet has a magnetic field, and the pen produces its own magnetic field -- and energy -- from it. (That's why no batteries or power adapter is needed.)

The magnetic field emanating from the pen is recognized by the sensor board. From that, it can track the pen's location, pressure and speed. The sensor board itself is made up of a lot of little antenna coils, but it also has a control board that monitors the coils to determine where the current is (i.e., where the pen is). And that's what tells your computer that you want to add a moustache to the picture of your sister that you're photoshopping. Wacom calls this patented technology EMR, or electromagnetic resonance technology.

It's a little different if an LCD screen is used, which is the case with the Cintiq line of tablets. In that case, backlighting or a component that gives off its own field could disrupt the pen's magnetic field. As such, all metal or problem parts must be tightly shielded to block out the field. The metal frame around the LCD screen -- which undoubtedly affects magnetic fields -- is accounted for in the control board, which recognizes a "weak" signal from the pen and corrects it so it follows a predictive course. 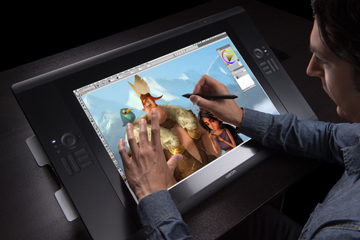 Now that we know how they work, let's familiarize ourselves with the many different tablet models that Wacom offers -- 13, to be exact. All the tablets fall under three lines, each of which has distinct features that appeal to specific audiences.

First, we'll look at two lines of tablets that Wacom advertises as most appropriate for "creative professionals." These are the tablets for people who have a stronger background in digital art or graphics and want to use a tablet for work, as opposed to hobby.

First up is the Intuos Tablet. The Intuos5 comes in small (12.5 inches, or 31.7 centimeters), medium (15 inches, or 31.1 centimeters) and large (19 inches, or 48.2 centimeters) and ranges in price from $229 to $469. (An extra-large Intuos4 is available, but it loses some features.) These have the look of a traditional design tablet, meaning a matte-looking surface you "draw" on while watching your own computer screen (all devices connect through USB and a pretty standard software download). The Intuos is multi-touch capable, which means you can navigate with your fingers and you can touch a key that will easily display your tablet settings on your computer screen. With customized ExpressKeys (buttons at the bottom of the tablet that give "shortcuts" to functions) and applications like SketchBook Express, Wacom touts the Intuos line as a good option for a professional working in design.

Another tablet that's geared toward professionals is the Cintiq line. These come in a 12-inch (30.4-centimeter) model, a 22-inch (55.8-centimeter) model and two 24-inch (60.9-centimeter) models ($999-$3699). Setting them apart from the pack are their LCD screens, which allow you to draw, write or design directly on the screen. It's the same technology -- pen and all -- but with the benefit of an LCD screen. As you might surmise from the price points, these are highly advanced tablets that are primarily going to be used by professionals who need the control of traditional art tools but in a digital format. Adobe Photoshop and Adobe Lightroom, among other traditional design applications, are bundled with them.

But maybe you're just exploring graphics tablets for the first time or are using them outside of work? Next, we'll check out a line that might suit you. 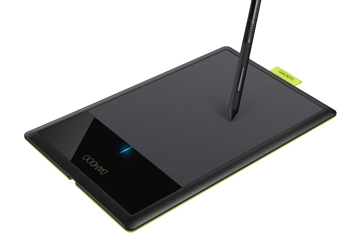 This is the tablet for your average design geek or burgeoning artist. The Bamboo line is designed (and priced, from $79-$200) for someone who is just starting out with digital design or a hobbyist. The line has four different models, and while Intuos and Cintiq were designed to be used in many ways, the Bamboo tablets are fairly tailored to specific areas of interest.

For those who are a bit more interested in capturing their art or design digitally, both the Splash and the Connect would be a simple, bare-bones tablet. The Bamboo Connect is as basic as you can get: It lets you sketch, write and generally work with what Wacom refers to as "visual communication" tools. The Bamboo Splash is nearly the same; in fact, apart from a different application that comes with it -- the painting and drawing software AirRage -- it's identical. Having an extra application probably makes the Splash a better deal, as the price point of the Connect and Splash is exactly the same.

The Bamboo Capture is attempting to, well, capture the photography audience. With Adobe Photoshop and multi-touch capability, this tablet is designed to easily zoom, airbrush, correct or modify digital images. While it does have features like Nik Color Filters that are helpful for photography and digital images as well as SketchBook, it doesn't include the painting and drawing software that the Splash is more focused on.

The Bamboo Create is like the wise leader of the Bamboo team. With an active area of almost 9 inches (compared to the 6 inches the other models offer), it's physically larger. It combines most of the features in the other Bamboo applications (Adobe Photoshop and Sketchbook Express) with some extras of its own (Corel Painter). With multi-touch capability, it's the tablet for someone who knows their digital stuff but maybe doesn't need some of the more professional features of the Intuos. (Or the added cost.)

Who's using Wacom tablets and what for? 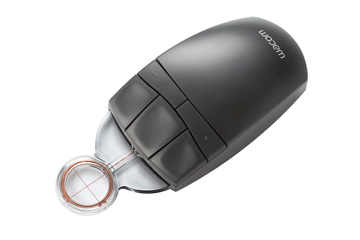 Wacom's Lens Cursor is a mouse-like, very precise pointing device that architects and engineers can use in conjunction with some of its tablets.
Courtesy Wacom Europe

As we've talked about, Wacom tablets are marketed to many different audiences. The first market is, not surprisingly, creative professionals. From graphic designers to product developers, there's a Wacom tablet that just might make your job easier.

Wacom touts the Cintiq system, for instance, as a valuable tool for animation professionals, with its pressure-sensitive pen to vary line thickness and the immediacy of working on screen. (They also make a point of saying that those old, hand-drawn storyboards no longer need to be scanned in but are right at your fingertips.)

For graphic designers, the Intuos and Cintiq tablets provide a more "pen-and-paper" feel than, say, working with a mouse. The shortcuts offered, like ExpressKeys or even the expediency of drawing as opposed to pointing and clicking, are also touted as time savers. Naturally, any professional work that requires sketching or artistic operations -- or any degree of digital manipulation -- is probably going to find a Wacom tablet useful in streamlining their process.

Makes sense, but why would anyone else need one? One reason might be a hobby; if you're an artist, a tablet can easily let you transfer your art into a digital sphere. Applications like Corel Painter aren't your mama's ClipArt, either. This app allows you to create traditional-looking paintings with your pen acting as a brush. Of course, we could all use a little airbrush help with our photographs, and Wacom tablets and pens allow subtle and specific manipulation of your digital images that point-and-click navigation might not.

Specialized industries are using Wacom tablets as well. CAD/CAE lens cursors, used in architecture and engineering design, are compatible with some Intuos tablets. GIS (Geographic Information Systems) professionals also benefit from the technology, as the mapping and design of geospatial data is potentially much easier to design and implement with the pen and tablet. Wacom also points out that doctors could chart patients' data on the tablet, storing their (notoriously hard to read) notes digitally.

Note that while many of the Wacom tablet models need to be connected by USB to your PC or Mac, the Intuos models, the Bamboo Capture and the Bamboo Create can be used wirelessly. The components and battery are about $40, and the battery ranges anywhere from 6 hours (for larger models) to 15 hours (for smaller tablets).

As a first-rate doodler -- in terms of quantity, certainly not quality -- I saw the appeal of Wacom tablets but maybe not the need. I wasn't designing graphics or products (for which the graphics and product industries should be thankful), and my artistic side is satisfied with a meandering pen on a notepad. But Wacom tablets do fill a void even I have by allowing me to hand-write notes directly on my computer and mess with photos. Let's face it -- You need the Wacom tablet a lot more if you're a designer, artist or the like. But technology isn't always used out of need: sometimes it's used just because it's cool.