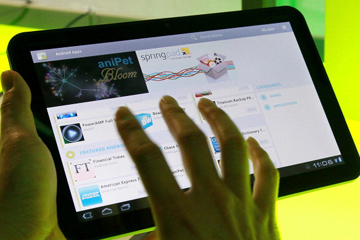 Tablet computers aren't new. In fact, they've been around for about 20 years, but nobody much was buying them until April 2010, when Apple shook up the consumer electronics marketplace with the iPad. Perhaps because it bore a strong resemblance to Apple's already wildly popular iPhone – it even runs the same operating system – the iPad caught fire immediately with the public and turned tablet computers into a major product category. And why shouldn't they be? Tablet computers are the ultimate in electronic simplicity. Highly portable, with few built-in controls except for a flat touch-screen interface, tablet computers are attractive, easy to use and just plain cool.

Like the iPad, Android tablets have a touch-screen interface, which allows the user to activate icons with the tap of a finger or move objects around and scroll screens with a swiping gesture of their hands. Both Apple and the various Android manufacturers offer an online marketplace where programs – known as apps in mobile computing parlance – can be purchased and downloaded directly to the device. In fact, Android tablets are enough like iPads that at a casual glance a user unfamiliar with the two types of tablet might mistake one for the other.

So which is the better tablet? That's a tough question. It's not so much like comparing apples (or Apples) with oranges as it's like comparing one or two apples with a whole basketful of oranges. Only Apple makes the iPad and there are only two versions: the iPad and the iPad 2. On the other hand, any company that's able to manufacture hardware that will support Google's operating system can make an Android tablet and inevitably some companies are going to do a better job of it than others. Some companies even disguise their Android tablets as something else. (The Barnes & Noble Nook e-book reader is an android tablet with a limited range of features and a small subset of available Android apps.) But it's possible to compare the iPad against some representative Android tablets.

When the Xoom hit the marketplace, Motorola knew that it would have to beat the iPad's specs, so it shipped with a dual core processor, potentially allowing software to run twice as fast as on the iPad, and two built-in cameras, a 5-megapixel camera facing forward and a 2-megapixel camera facing backward toward the user to allow video chatting. This was exciting for the many people who had been annoyed that Apple hadn't gotten around to including a camera in its first iPad. The Xoom's screen, at 10.1 inches, was slightly larger than the iPad's, and its 1280x800 display offered marginally higher graphics resolution. The Xoom comes with 32 gigabytes of memory, but its memory can be expanded using MicroSD (Secure Digital) cards.

But Apple still had the advantage for most users. Why? Because programmers had been developing apps for the iPad for nearly a year before the Xoom appeared and the Apple App Store was bursting with thousands of programs while the Android app store was nearly empty. And Apple quickly struck a new blow in the hardware wars when it replaced the original iPad with the iPad 2. We'll look at the iPad 2 and take a closer look at iPad apps vs. Android apps on the next page. 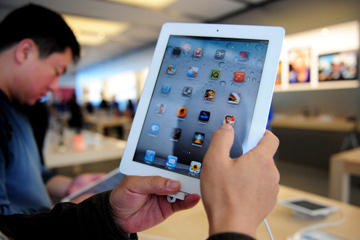