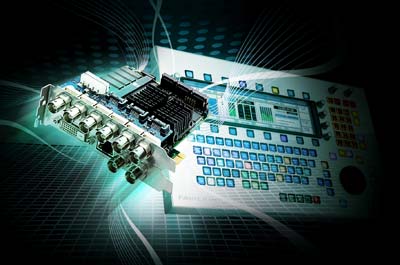 ­In September 2007, an Australia-based company called Fairlight introduced a new digital audio production device named Xynergi. Gadget blogs covered the story and called Xynergi a $28,000 keyboard. Such labels are misleading. In reality, identifying Xynergi as a $28,000 keyboard is like saying the audio system inside a Bentley is a $250,000 radio -- it misses the big picture.

The Xynergi keyboard is part of a desktop media production center package. Fairlight designed Xynergi to meet the needs of small, professional media editing studios. With Xynergi, engineers can capture audio, manipulate individual tracks, add effects, mix multiple tracks together and edit video files. While the device's complexity and price tag mean the average consumer isn't going to buy it, Xynergi might be a good choice for someone with a small recording studio or media companies that need an interface that will let them edit audio and video quickly.

The Xynergi keyboard looks like a large computer keyboard with several extra keys, a few knobs, a dial called a jog wheel and a rectangular color monitor above the main array of keys. Fairlight calls the monitor and the surrounding controls the pad. Xynergi's main key array is in the standard QWERTY layout with a number pad on the right. Engineers use the knobs, keys and jog wheel to manipulate digital audio and video files.

­If you've ever seen a professional audio mixing console or video editing control system, you know that there are many more switches, knobs and toggles than you'll find on the Xynergi keyboard. In order to replicate the functions that these large consoles have, Fairlight came up with a clever idea -- self-labeling keys. These ar­e keys that can change functions and key labels depending on what you're trying to do. Each key is a small computer monitor that can display different characters, including letters, symbols and words. Xynergi has an "animate" feature that makes keys flash on and off or change colors during specific tasks. The keys can even display video. As engineers switch from one operating mode to another (for example, moving from a word processing mode to an audio mixing mode), the key labels change and the keys themselves map to new functions.

In this article, we'll take a look at what makes Xynergi tick, examine some of Xynergi's functions and learn more about Fairlight's market strategy for Xynergi, including where you can pick one up and how much it'll set you back.

In the next section, we'll take a closer look at the technology behind Xynergi. 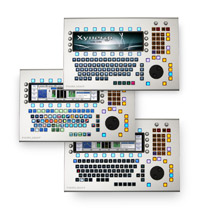 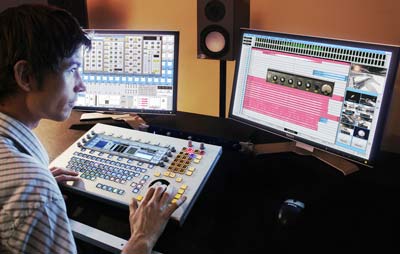 Xynergi's interactive keyboard has application awareness, which means the keys display only the symbols and commands appropriate for the application currently in use. If an engineer needs to jot some notes down in Microsoft Word, for example, he or she can push a key on the Xynergi keyboard to activate Word. The Xynergi's keyboard then switches to a QWERTY keyboard. When finished, the engineer can push the Edit key to return to Xynergi's editing software, and the keys will change again.

Because every key is actually a small color monitor, keys change colors to indicate active functions. For example, if an engineer wants to work on a specific track, he or she can push a button mapped to that track. The key will change from blue to red, indicating the track is active and ready for mixing or editing applications. If the engineer assigns a name to a specific track, the name will appear on the key mapped to that track.

Engineers use the jog wheel whenever they need to scan through an audio track quickly. Rotating the jog wheel clockwise or counterclockwise advances or reverses the track, respectively. This feature also allows engineers to designate specific sections of a track for editing -- the engineer uses the wheel to mark the beginning and end of a range within a track. The engineer can then add effects to the marked range without affecting the rest of the recording.

Fairlight calls the area that includes the color screen and the surrounding buttons and knobs the pad. The screen displays information about audio tracks, giving users a visual representation of the digital file. It can show the name of an audio track, bars that indicate the distribution of the track's sound across different speaker channels, an equalizer and a time code display. The buttons and knobs surrounding the screen allow an engineer to manipulate the track or set Xynergi in its automated editor mode.

Here are just a few of Xynergi's functions:

The Xynergi system includes the same functions you'd find on a large audio or video editing console, but has a price tag that's only a fraction of what those systems cost. In the next section, we'll find out just how much the Xynergi system costs and where you can find one.

Engineers can adjust eight bands of frequencies in each audio channel using Xynergi's equalizer. Lower frequencies, measured in units called hertz, correspond to sounds with a lower pitch. The equalizer lets engineers adjust the tone of an audio track by increasing or decreasing the amplitude of each band of frequencies. To learn more about sound frequencies, read our article on How Analog and Digital Recording Works. 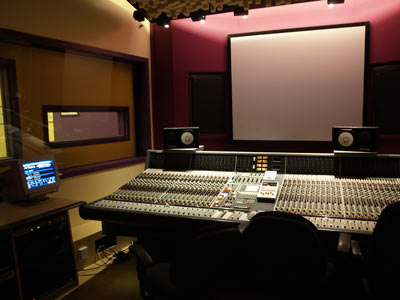 While Fairlight estimated Xynergi's retail price at 20,000 euros, which converts to more than $29,000, its actual retail price isn't quite so high. Guitar Center Pro is North America's only distributor of the Xynergi Media Production Center, and its price is only $22,973. For this price, you get the keyboard, a CC-1 card, an SX-20 I/O toolbox and the Xynergi software toolkit. You'll still need a PC (Xynergi is not Mac compatible), monitors, speakers and other input and output devices -- the Xynergi Media Production Center doesn't include them.

After purchasing a Xynergi system, you might find yourself overwhelmed with its functions. Fortunately, Fairlight foresaw this very problem and included an interactive help system called Xplain. To use the Xplain system, you hold down the Xplain button on the keyboard and then press any other key to find out what it does and how to use it. A corresponding help message appears on the pad's screen. You can do this with any button, and the system will helpfully tell you what the function does.

Some buttons map to shortcuts to other programs. For example, there's a button for Internet Explorer. Pushing that button will launch IE and the keyboard will switch to the QWERTY layout. Users can map keys to specific functions not included in Xynergi's package, though the system may not be able to use its application awareness feature for every program.

Fairlight first began to ship the Xynergi platform out to customers and retailers in September 2007. The first business in the United States to purchase the system was Buzzy's Recording, a studio based in Los Angeles. The company plans on using Xynergi for voice overs and automated dialogue replacement (ADR) [source: Fairlight]. Fairlight expects the system to gain popularity quickly within the audio and video editing industry.

To learn more about Xynergi and topics related to audio and video editing processes, follow the links on the next page.

The System that Goes Up to 11

How Printer Ink Works
How does your computer know how much ink is left in the cartridge?
How Transmissive Film Works