Browse the article How Broadband Over Powerlines Works 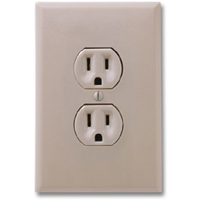 An emerging technology may be the newest heavy hitter in the competitive world of broadband Internet service. It offers high-speed access to your home through the most unlikely path: a common electrical outlet.

With broadband over power lines, or BPL, you can plug your computer into any electrical outlet in your home and instantly have access to high-speed Internet. By combining the technological principles of radio, wireless networking, and modems, developers have created a way to send data over power lines and into homes at speeds between 500 kilobits and 3 megabits per second (equivalent to DSL and cable).

BPL is already being tested in several cities around the United States and the United Kingdom. In this article, HowStuffWorks takes a look at this new service, how it's possible, and what it could mean for the common electrical appliance. We'll also learn about the controversy surrounding BPL.

If you think broadband is amazing, then click here to learn how wireless mesh networks work.

Despite the proliferation of broadband technology in the last few years, there are still huge parts of the world that don't have access to high-speed Internet. When weighed against the relatively small number of customers Internet providers would gain, the cost of laying cable and building the necessary infrastructure to provide DSL or cable in rural areas is too great. But if broadband could be served through power lines, there would be no need to build a new infrastructure. Anywhere there is electricity there could be broadband.

By slightly modifying the current power grids with specialized equipment, the BPL developers could partner with power companies and Internet service providers to bring broadband to everyone with access to electricity.

At this point, the proposal is for two types of BPL service:

By providing high-speed data transmission between all of the electrical plugs in a house, there is the potential to network all kinds of common appliances in a household. If your alarm clock, light switch and coffee maker could talk each other via a high-speed connection, mornings might look a lot different.

In the next sections, we'll learn about the technology behind both In-House and Access BPL.

If you've read How Internet Infrastructure Works, then you understand that the Internet is physically a huge network of networks that are connected through cables, computers, and wired and wireless devices worldwide.

Typically, large ISPs lease fiber-optic lines from the phone company to carry the data around the Internet and eventually to another medium (phone, DSL or cable line) and into your home. Trillions of bytes of data a day are transferred on fiber-optic lines because they are a stable way to transmit data without interfering with other types of transmissions.

The idea of using AC (alternating current) power to transfer data is not new. By bundling radio-frequency (RF) energy on the same line with an electric current, data can be transmitted without the need for a separate data line. Because the electric current and RF vibrate at different frequencies, the two don't interfere with each other. Electric companies have used this technology for years to monitor the performance of power grids. There are even networking solutions available today that transfer data using the electrical wiring in a home or business. But this data is fairly simple and the transmission speed is relatively slow.

BPL technology developers Current Communications Group and Enikia are working with power companies like Ameren and EPRI to get BPL off the ground. There are several different approaches to overcoming the hurdles presented when transmitting data through power lines. The details of these approaches are still pretty closely guarded secrets as both companies vie for the FCC's and IEEE's blessing for having their method adopted as the standard way to deploy BPL.

In the next section, you'll learn the basics about the different approaches.

Power to the People

These power lines are just one component of electric companies' power grids. In addition to lines, power grids use generators, substations, transformers and other distributors that carry electricity from the power plant all the way to a plug in the wall. When power leaves the power plant, it hits a transmission substation and is then distributed to high-voltage transmission lines. When transmitting broadband, these high-voltage lines are the first obstacle.

The power flowing down high-voltage lines is between 155,000 to 765,000 volts. That amount of power is unsuitable for data transmission. It's too "noisy."

As stated before, both electricity and the RF used to transmit data vibrate at certain frequencies. In order for data to transmit cleanly from point to point, it must have a dedicated band of the radio spectrum at which to vibrate without interference from other sources.

Hundreds of thousands of volts of electricity don't vibrate at a consistent frequency. That amount of power jumps all over the spectrum. As it spikes and hums along, it creates all kinds of interference. If it spikes at a frequency that is the same as the RF used to transmit data, then it will cancel out that signal and the data transmission will be dropped or damaged en route.

Once dropped on the medium-voltage lines, the data can only travel so far before it degrades. To counter this, special devices are installed on the lines to act as repeaters. The repeaters take in the data and repeat it in a new transmission, amplifying it for the next leg of the journey.

In Current Communications Group's model of BPL, two other devices ride power poles to distribute Internet traffic. The CT Coupler allows the data on the line to bypass transformers.

The transformer's job is to reduce the 7,200 volts down to the 240-volt standard that makes up normal household electrical service. There is no way for low-power data signals to pass through a transformer, so you need a coupler to provide a data path around the transformer. With the coupler, data can move easily from the 7,200-volt line to the 240-volt line and into the house without any degradation.

In the next section, we will see how the data moves around once it reaches the house.

The last mile is the final step that carries Internet into the subscriber's home or office.

In the various approaches to last-mile solutions for BPL, some companies carry the signal in with the electricity on the power line, while others put wireless links on the poles and send the data wirelessly into homes. The CT Bridge is capable of both.

The CT Bridge can also:

The signal is received by a powerline modem that plugs into the wall. The modem sends the signal to your computer. Let's take a look at these modems.

The BPL modem simply plugs into the wall and then into your computer. These modems are capable of speeds comparable to DSL or cable modems.
HowStuffWorks

BPL modems use silicon chipsets specially designed to handle the work load of pulling data out of an electric current. Using specially developed modulation techniques and adaptive algorithms, BPL modems are capable of handling powerline noise on a wide spectrum.

A BPL modem is plug and play and is roughly the size of a common power adapter. It plugs into a common wall socket, and an Ethernet cable running to your computer finishes the connection. Wireless versions are also available.

While the potential of this new technology is exciting, not everyone is excited about it. In the next section, we'll discuss some of the challenges confronting the implementation of BPL.

On April 23, 2003, the FCC put forth a Notice of Inquiry to the public supporting the potential of the BPL technology and seeking to set standards in practice for its implementation. Immediate opposition came from the American Radio Relay League (ARRL) and the Federal Emergency Management Agency (FEMA). Both entities claim that BPL will cause serious interference issues.

A BPL modem is considered an unlicensed device, like a cordless phone or garage door opener. All unlicensed devices are governed by the FCC's Part 15 rules. Part 15 mandates that all electronic devices sold in the United States must meet FCC radio-frequency emissions limits. These limits are in place to secure against interference with important transmissions like CB communications, air-traffic control and government channels. ARRL and FEMA are concerned about the interference caused by BPL signals transmitted on exposed medium-voltage power lines.

Cable TV operators get around the interference problem by shielding all of their cables. "Coaxial cable" used by cable TV operators has a braided metal shield that surrounds the signal wire. Telephone cables are also shielded. Power lines, on the other hand, have no shielding. In many cases, a power line is a bare wire, or a wire coated in plastic. The lack of shielding is where the interference concern comes from.

Depending on the bandwidth the FCC allots for BPL, interference with other radio services may be a problem. Currently, the frequency band breaks down as follows:

While FEMA is wiling to allow the FCC to seek a compromise, the ARRL claims that compromise is not possible because the bandwidth needed for BPL will directly interfere with ham radio and short-wave radio transmissions. Developers of BPL say that these interference issues have been solved. Only tests and time will tell. Until then, the advancement of BPL moves forward slowly as it waits for standards and logistics to be decided by regulating bodies.

For more information on BPL, other Internet connection methods, and related topics, check out the links on the next page.