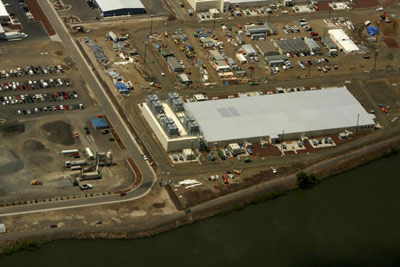 When Larry Page and Sergey Brin began work on a project called BackRub, they probably didn't envision the enormous corporation that would grow out of their early efforts. This project evolved into Google, a juggernaut of a company that competes on a global scale with other mega corporations. While the company has products ranging from Web-based e-mail to collaborative office applications, its corporate mission has remained the same. Google intends "to organize the world's information and make it universally accessible and useful" [source: Google].

Google's search engine is the oldest and likely most famous tool in the company's arsenal. But the engineers at Google view organizing the world's information as a job too complex for just a search engine. The company designs tools and services that relate to its mission, sometimes in ways that aren't obvious at first glance. One major focus for the company is cloud computing.

Google isn't alone in offering cloud computing services. Companies like Apple and Microsoft offer products that either directly involve cloud computing services or rely on them in some way. Amazon, the online retail giant, has a thriving cloud storage business. That doesn't mean Amazon has a warehouse filled with fluffy, white clouds. It means the company rents out storage space within its massive data centers. If you are running a company that wants to offer a Web site or service to customers, you may consider using a company like Amazon to host your data.

Google also has a reputation for building enormous data centers. In The Dalles, Ore., Google has a data center built next to the Columbia River. Each building in this data center is about the size of a football field. The location has many features that make it attractive for a data center: It's near hydroelectric dams, which makes power accessible and economical. It's also in an area with a fiber-optic network, which allows for lightning-fast data transmissions [source: Markoff and Hansell].

These huge facilities are necessary for Google to carry out its corporate mission. Not only must the company search and index the world's information on the Web but it also has to provide the power for a growing network of cloud computing services. Now, let's take a look at exactly what cloud computing means.