What do you think computers will be like in 2050? 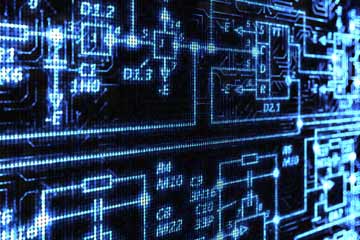 What will the computers of the future be like?
©iStockphoto/Thinkstock

What will the computers of tomorrow be like? Will we still be using keyboards and mice or will we actually live inside a partially digital world? Here’s what we think is in store for the future of computing but share with us your predictions in the comments!

In 2010, IBM introduced the zEnterprise 196 (z196), which boasted a processor capable of running at 5.2 gigahertz (GHz) -- the fastest commercially available processor at that time. That means the z196 processor ran at 5.2 billion cycles per second. Every instruction a processor executes requires a set number of clock ticks. The more clock ticks a processor squeezes into a second, the more instructions that processor can complete in a given amount of time. That's what we mean when we say a 5.2-GHz processor is faster than a 3.2-GHz processor -- the 5.2-GHz microchip is capable of executing more instructions than the 3.2-GHz chip in the same amount of time.

If 5.2 GHz was the top speed in 2010, what will it be in 2050? Assuming engineers can find ways to keep up with Moore's law and processor speed actually doubles every 24 months, by 2050 we'd have a chip capable of running at 5,452,595 gigahertz, or nearly 5.5 petahertz. It's hard to imagine what kind of applications we could direct such a machine to tackle. Complex computational problems, such as building virtual simulations of the human brain, may become a relatively simple task. Some futurists believe we may even create machines with intelligence far greater than our own. Perhaps those machines could discover ways to improve processing speeds even faster than humans can. Before long, you could have a self-improving device pushing the physical limits of how fast machines can process information.

While this dream of the future is popular among a certain segment of computer scientists and futurists, other people are more skeptical. Perhaps the human mind is far more complex than we understand. Thinking may involve more than just electrochemical messages passed between neurons. Perhaps there's a hormonal element that subtly shapes how we think. If that's the case, it may be that pure computational horsepower won't be enough to create a machine capable of what we consider thought.

Setting aside the artificial intelligence debate for a moment, what might futuristic computers look like? They might actually be invisible. Pervasive computing is a type of technology that incorporates computers into just about anything you can imagine. Buildings, highways, vehicles and even the clothing you wear might have built-in computer elements. Coupled with networking technology, the world of 2050 may be one in which the very environment around you is part of a massive computing system.

In such a world, your digital life and your real life could overlap seamlessly. We see hints of this world in today's technology. There are hundreds of smartphone applications that add a digital layer over our perception of the real world. They might help you navigate around a strange city or discover a new favorite restaurant tucked away in a corner somewhere. These applications still require us to activate programs on mobile devices and use those devices as a lens through which we can see the digital world. In the future, we may be able to accomplish the same thing using glasses, contact lenses or perhaps even ocular implants. Imagine being able to look at the world through one of a million different filters, all of which provide different kinds of information to you instantaneously.

Then again, it's possible that our ingenuity won't be enough to keep up with Moore's law after a few more microprocessor generations. Perhaps our computers will be more mundane and functional. But considering the way they've transformed our world over the last 50 years, I'm willing to bet 2050 will be an exotic, digital era. What do you think?

We want to hear what your predictions are for the future of computing. Share your ideas in our comments section!