What is the future of the Internet? 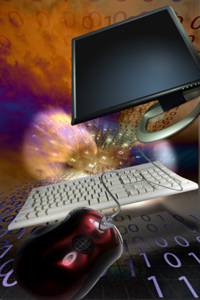 Internet Connection Image Gallery What does our crystal ball say about the future of the Internet? See more Internet connection pictures.
Hemera/Thinkstock

The Internet is just a few decades old, but in that short span of time it has experienced significant changes. It grew out of a hodgepodge of independent networks into a global entity. It serves as a platform for business, communication, entertainment and education. And you can connect to this enormous network through dozens of different devices.

What's next? When you can call up minute trivia about the most obscure subject you can think of with a couple of taps on a smartphone screen, where else can you go? The answer isn't entirely clear, but the possibilities are exciting.

That's an enormous gap between what's currently possible and what's commercially available. But as time passes, the costs of producing ultra-high-speed networks will decrease. Eventually, the average consumer will be able to download a high-definition movie in a second or play cloud-based video games without a hint of lag.

Even as wired connections reach unprecedented speeds, wireless technology continues to evolve. Technologies like LTE and WiMAX give us the ability to access the Internet wirelessly at speeds comparable to broadband connections. It also opens the doors for portable devices like smartphones, laptops and tablets to plug into the Internet without the need for wires.

We believe that the Internet will be faster and more pervasive. What else might the future hold?