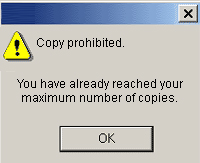 It's a pretty simple thing to allow Jane to copy "Everything is Everything" only twice. Computers understand "2." But they don't understand Jane when she says "I've already copied it to my MP3 player and my laptop, but I got a new desktop computer and I need to transfer it again!"

"Fair use" is not necessarily something that's easily determined. Many companies have taken desperate measures to "plug the hole" of digital content flowing over the Internet, eliminating any right on the part of the consumer to make decisions regarding the content he or she has purchased. To many, more recent DRM schemes have crossed the line from copy protection to hog-tying the user.

A common DRM encryption scheme provides an encryption key that works forever. In this case, the key must be tied to the ID number of the user's machine. The key will only decode the file when it's accessed from the computer it was originally installed on. Otherwise, the user could simply forward the key along with the encrypted software to everyone he knows.

Some products, like those protected by Macrovision SafeCast or Microsoft Product Activation, use a Web-based permission scheme to prevent illegal use of the content. When a user installs the software, his computer contacts a license-verification server to get permission (the access key) to install and run a program. If the user's computer is the first to request permission to install this particular piece of software, the server returns the key. If the user gives the software to his friend and the friend tries to install it, the server will deny access. In this type of scheme, a user typically has to contact the content provider to get permission to install the software on another machine.

A less common DRM method is the digital watermark. The FCC is trying to require a "broadcast flag" that lets a digital video recorder know if it's allowed to record a program or not. The flag is a piece of code sent out with a digital video signal. If the broadcast flag says a program is protected, a DVR or DVD recorder won't be able to record it. This DRM proposal is one of more disruptive ones out there, because it requires media and equipment that can read the broadcast flag. This is where Philips' Video Content Protection System (VCPS) format comes in. The VCPS technology reads the FCC broadcast flag and determines whether or not a device can record a program. A disc with unprotected video can play on any DVD player, but video with a broadcast flag will only record and play on VCPS-prepared players.

The DRM-provider Macrovision used an interesting approach in one of its recent DVD-protection products. Instead of making a DVD uncopyable, Macrovision RipGuard exploits glitches in DVD ripping software to prevent copying. It's a piece of code in the software on a DVD, and its purpose is to confuse the code known as DeCSS, a small program that allows software to read and rip encrypted DVDs. Macrovision programmers studied DeCSS to discover its flaws and then built RipGuard to trigger those flaws and shut down the copying process. DVD consumers have already found ways around RipGuard, though, mostly by using ripping software that doesn't employ DeCSS or by tweaking the code in DeCSS-based rippers. The Digital Millennium Copyright Act of 1998 makes disabling a DRM system illegal in the United States, but many people actively seek and publish methods to bypass DRM restrictions.