Browse the article How Fabric PCs Will Work 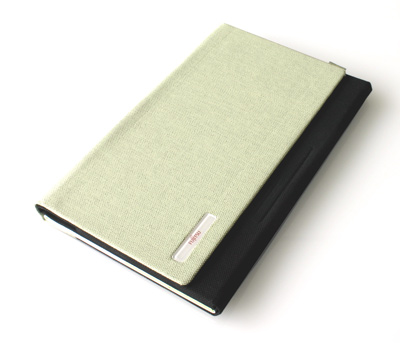 Imagine walking to school or work with a brand-new type of laptop computer in hand. You walk casually, swinging the laptop back and forth between your arms, which is easy, since it weighs well under one pound (0.45 kg) and isn't much thicker than a checkbook. Although it has no carrying case, you hardly blink after dropping it onto the concrete sidewalk. Instead you pick it up, dust it off, and continue on your way. When you arrive at your desk, you toss the laptop down on the table and open it up. The screen immediately unfolds, spreading out into an enormous display!

While this scenario sounds very futuristic, it actually isn't that far from reality, thanks in part to a concept design called a Fabric PC (personal computer), produced by Fujistu, Inc. Amazingly, a Fabric PC won't be encased within a tough metal shell like the PCs that have been around up to this point. Instead, it will be built into a tough but pliable fabric frame. Even the screen will able to bend and fold and will have a thickness and flexibility similar to a laminated sheet of paper.

Ho­w exactly will the Fabric PC concept become a reality, given its radical departure from current designs? Furthermore, how could it be predicted to hit the market in just a few years? Experts say it will be available in 2 to 10 years. Find out why this technology really is right around the corner and why some of its seemingly futuristic features aren't actually so different from what's being offered by products available on the market today.

Keep reading to lear­n how a computer could be built within a flexible fabric frame instead of a more traditional rigid metal housing.

Conventional computer hard disk drives are large and bulky, but flash memory, common today in memory sticks and cameras, is a possible lightweight alternative for memory storage in the laptops of tomorrow. 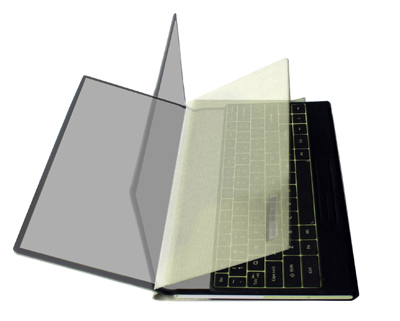 The Fabric PC is completely flexible -- it even has a fabric keyboard.
Fujitsu

Basically, the laptops with which we're all familiar consist of many individual components, each fixed within a metal frame. The entire structure opens and closes like a book. Not only does a traditional laptop's metal frame form a rigid shell, but most of its internal components are bulky and rigid, too. The largest of these components is the screen, or display. There are several different types of modern computer displays, each built with different technologies, but most of today's displays are inflexible, bulky and surprisingly fragile. The hard disk drive, used to store memory, is another large and rigid component of a traditional laptop. The list continues and includes many other components you're probably familiar with, such as the CD/DVD drive and the battery.

How could a Fabric PC get around the need to be rigid, with multiple bulky components all fixed into a metal frame? There are at least three main components to the Fabric PC design that will allow this to happen. First of all, the computer display will be constructed from a cutting-edge technology called e-paper, allowing the display screen to be paper-thin and bendable. We'll come back to this concept on the next page.

A second essential feature of the Fabric PC's flexible design is that its individual components will be built into a pliable fabric-like backbone rather than a metal frame. While the components themselves will still be rigid, the device as a whole will have some flexibility if the components are spaced apart within the fabric -- somewhat similar to how rigid rhinestones can be sewn into a fancy dress.

One final key to the Fabric PC's design is straightforward -- its individual components will be as small and lightweight as possible. Also, non-essential components will likely be left out. This minimalist approach to computer design has already been the trend for some of today's laptops that are designed to be small and lightweight. For example, lighter "flash" memory has been used in place of bulkier hard disk drives. With the ability to quickly download files wirelessly, the CD/DVD drive can be left out entirely. The e-paper display that Fabric PCs will use potentially has much lower power requirements than conventional displays, so even the battery might be a target for downsizing.

You may be wondering about one key point that we haven't covered yet -- the flexible display screen. Keep reading to learn just how flexible the Fabric PC will be.

Trade shows are where technology companies often choose to demonstrate their latest technology and concept designs. Sometimes the products are working prototypes, but oftentimes they're non-functional models, designed simply to show what the device might look like. 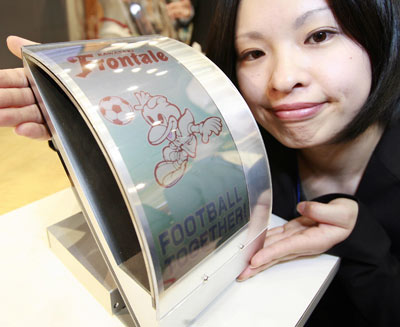 A Fujitsu employee displays the prototype model of an electronic paper display that is flexible and does not blur even if it is bent or pressed by a finger.
YOSHIKAZU TSUNO/AFP/Getty Images

For a thin and bendable display, Fabric PCs will rely on a cutting-edge technology called e-paper, or electronic paper. The technology behind e-paper was pioneered in the 1970s by Nick Sheridan at the Xerox Palo Alto Research Center and has continued to evolve since that time. Today there are several different implementations of the basic e-paper concept.

One example of e-paper technology is called E ink, made by the E ink Corporation. We'll very briefly touch here on how E Ink technology works, but to learn much more about it, read How Electronic Ink Works. Basically, this form of e-paper is created by sandwiching millions of tiny plastic wells between two sheets of flexible plastic. Each well contains both white and black particles, suspended within a clear fluid. The key to this technology is that the white and black particles have opposite charges, so when an electric voltage is applied to individual wells -- through circuitry embedded underneath -- the black and white particles can be separated to opposite sides. In this way, the face-up side of each well can be set to appear either as black or white as seen through the top layer of clear plastic. Each well functions as a separate pixel on the E ink display.

E-paper, based on this type of design, can be curled or even folded like a sheet of laminated paper, and because of its light weight and flexibility it's also much less fragile than traditional displays. Fujitsu's Fabric PC concept designs take full advantage of these characteristics by incorporating large displays that can fold up to fit within a Fabric PC's case when it is closed. The power requirements for e-paper displays are also much lower than for traditional displays. For Fabric PC's, this will translate into longer battery life and/or smaller batteries.

Keep in mind that the Fabric PC is currently just a concept design and that even working prototypes have yet to be developed. One of the factors that Fabric PC development will depend upon is continued progress in e-paper technology. As exciting as e-paper is, it's important to stress that e-paper technology is still a work in progress, too. There are considerable technical challenges that must be overcome before low-cost e-paper displays will be available. For example, just one of those challenges will be the ability to display a full range of colors that can also update quickly enough to accommodate video output. Bringing the cost of e-paper displays down to an affordable level will be especially important as well.

What other technologies similar to the Fabric PC concept are in store for the near future? Keep reading to find out.

E-paper on the Market

Though e-paper is still a developing technology, you've probably already seen it in products available on the market today. For example, many cell phones currently use e-paper displays, and e-paper is also present in electronic readers such as Amazon's Kindle, an electronic reading device. 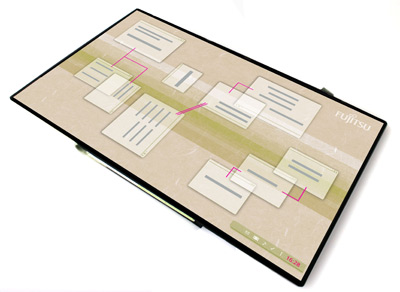 The Fabric PC has a large, flexible e-paper display.
Fujitsu

As the technologies behind the Fabric PC concept continue to develop, durable, pliable and light-weight computer-based devices will be introduced into all corners of the business and entertainment world.

To illustrate, Fujitsu has unveiled several other concept devices along with the Fabric PC, which rely on similar basic technology. One example is the "clerk browser" -- a computer worn around the wrist like a large bracelet. This concept device was demonstrated as a means by which store clerks or salespeople could provide on-the-spot information to customers -- although it's easy to imagine other applications for this type of wearable computer. As with the Fabric PC, e-paper and small, lightweight components would be essential features of this type of device.

The "card viewer" is another one of Fujitsu's concept designs that would rely on e-paper. In fact, this device can be thought of as an e-paper notepad. Because e-paper requires inputs to make changes to its display, once the display is set, it remains set, even when disconnected from its power source. The card viewer concept takes advantage of this situation by incorporating one or more sheets of e-paper displays that can be detached from the device and handed off just like a business card. The detached sheet of e-paper will continue to display the same image -- just like a normal piece of paper pulled from a notepad -- until reattached and updated.

There are countless other possible applications for the types of technology that Fabric PCs will employ. Just like Fabric PCs, most of these concepts will have to wait a few years until the supporting technology becomes more advanced and affordable. In the meantime we'll have to make do with these exciting concept models, and a little imagination, too.

For more information about PCs and related topics, follow the links on the next page.

Another foreseeable application of Fabric PC-style technology is for it to be embedded into clothing. When e-paper and other similar technologies become more common and their prices drop, it will be possible to use them to provide arbitrary messages and designs within clothes -- giving a whole new meaning to the term graphic Ts!