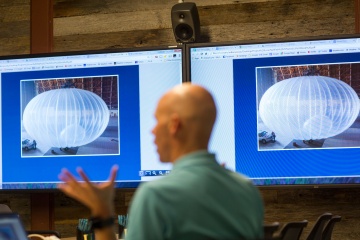 Project Loon's balloons are not your typical party balloons, which wouldn't fare well in the extreme conditions at high altitudes. Party balloons also wouldn't be able to carry much equipment. The Google Loon team has developed something more akin to a weather balloon, designed to withstand tough atmospheric conditions such as pressure differences, high winds, UV exposure and extreme temperatures, which are often well below freezing at higher altitudes. That means they can stay aloft much longer than any previously developed balloons. The various balloon models have been nicknamed after birds, including the Falcon, Ibis, Grackle and most recently NightHawk.

The balloons are made of polyethylene plastic around the thickness of a sandwich bag. Each inflated balloon (the portion referred to as the "envelope" of the balloon) is approximately 50 feet wide by 40 feet high (15 meters wide by 12 meters high), with about 5,381 feet (500 square meters) of surface area. Their size necessitates working on them in giant hangars, such as Google's rented space at Moffett Federal Airfield in California.

The balloons have two chambers (sort of a balloon within a balloon), the inner one filled with air and the outer one with helium. Valves and a fan attached to the bottom of the balloon can be used to pump air in or out. Adding air to the inner balloon increases the mass and causes the balloon to go down, and releasing air causes it to go up.

Many of the project's earlier balloons burst or didn't stay in the air very long. The team has gone to great lengths to analyze problems and make improvements. Google enlisted experts in ballooning, aerospace, textiles and other disciplines to learn why they were failing, and hired ex-military personnel to retrieve downed balloons (which sometimes fell in hard-to-reach places).

Some of the testing has been carried out in extreme conditions such as those the balloons might face in the atmosphere. At one point, temperatures fortuitously dropped to sub-freezing temperatures in South Dakota, one of the balloon manufacturing locations. More recent testing was done at the McKinley Climatic Laboratory at Eglin Air Force Base in Florida, which allowed them to subject the balloons to extreme weather conditions, such as high winds and below freezing temperatures, in controlled lab environment.

Many of the failures were found to be caused by tiny, leaks that were hard to detect. Even the tiniest pin-sized hole would greatly decrease a balloon's time in the air. Due to the findings, the seams were strengthened, and more careful balloon handling protocols were implemented, including team members only walking on them in very soft fuzzy socks.

Aside from improving the viability of its own project, Google's efforts have provided breakthroughs in ballooning itself. Due to design improvements, their balloons now stay afloat around 100 days. One even stayed up a record 187 days and circled the planet nine times [source: Raven Aerostar]. These are flight times that were unheard of before, and considered by some experts to be impossible.

The Loon team has also improved the deployment process a great deal since the beginning of the project. A crew used to have to lay the balloons out on tarps and unwrap and partially inflate them before launch, and they could only be launched in winds of 6 miles (9.7 kilometers) per hour or lower. But Google has developed Autolauncher (called the Bird House internally), a 50-foot (15.2-meter) tall portable hangar with an automated crane to stretch and fill the balloons. They can now be launched in 15 mile (24 kilometer) per hour winds, and the work that used to take 14 people and 45 minutes now takes 4 people and 15 minutes. These improvements make keeping enough balloons afloat to form a network more feasible [sources: Metz, Stone].