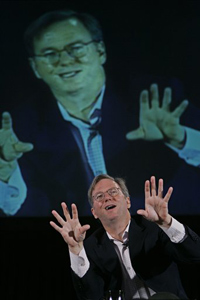 A great battle continues across the technological corporate landscape. Whoever wins this battle could dictate the role computers play in the foreseeable future. The arsenal on both sides includes hardware, software and the power of the Internet. It hasn't been pretty, and it's likely to get even uglier.

On one part of the battlefield is Microsoft, a corporation founded in 1975 by Bill Gates and Paul Allen. In June 2010, Microsoft was trading at $26 a share on the NASDAQ and its market value was $227 billion [source: Wolfram|Alpha]. The flagship product for Microsoft is the operating system Microsoft Windows. The company has leveraged its relationships with PC manufacturers to dominate the PC market. According to Net Applications, Inc., more than 91 percent of all PCs are running a Windows operating system [source: Net Applications].

On the other part of the battlefield is the young challenger: Google. Founded in 1998 by Larry Page and Sergey Brin, Google set out to become the best search engine on the Web. Considering that the Web had been around since the early '90s, Google had a lot of catching up to do. They did just that, and today Google is a powerful force on the Web, offering a suite of products ranging from mapping applications to mobile platforms. In June 2010, Google was trading at $488 a share on the NASDAQ and its market value was $119 billion [source: Wolfram|Alpha].

Microsoft made a big recovery after a rough climate took the company below $16 per share in March 2009. Google, after being as low as $263 per share in November 2008, has rivaled Microsoft in its recovery, proving it can sustain and come back strong even when times are tough. Though both companies made extensive cuts for the first time, they both show no signs of stopping their current growth trends as they introduce new products and expand their value in existing markets.

Who will win at setting the trends? Will the innovative upstart topple the established software veteran? Will their overlapping markets be a key factor in the battle?