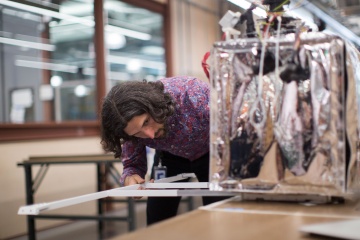 Christopher Schuster works on a flight electronics system for the Loon balloons in the Google X research lab.
© Brooks Kraft/Corbis

Google is, of course, not sending up balloons alone. Each balloon has a metallic box of electronic equipment hanging from the bottom via cord with attached solar panels for power.

Each solar panel is an array of monocrystalline solar cells encased in plastic laminate and held in an aluminum frame measuring about 5 feet by 5 feet (1.5 meters by 1.5 meters) in width. Two such panels are mounted facing outward from each other at sharp angles to catch what sunlight they can as the balloons spin. They generate around 100 watts of power in a few hours of full daylight, which is stored in batteries so that the equipment will continue to work in darkness.

The electronic payload includes computing equipment to control everything, rechargeable lithium ion batteries to store the sun-gathered power, GPS units to track balloon locations, dozens of sensors so that Google can monitor for atmospheric conditions and radio equipment for wireless communication with other balloons and with ground-based networks. The radio equipment includes a broad-coverage eNodeB LTE base station, a high-speed directional link and a backup radio.

According to Google, the connectivity provided by each balloon should cover an area of approximately 25 miles (40 kilometers) in diameter on the ground, with hundreds of people potentially able to connect to a balloon at the same time. The Loon team has also increased the data rate by 10 times since the beginning of the project [source: Google]. They expect coverage to be on par with typical LTE 4G network speeds. Project Loon's leader, Mike Cassidy, has stated that their balloon networks could cover as much as 5,000 square kilometers (1,931 square miles) on the ground, and provide service at 15 megabits per second on a phone, or 40 megabits per second on a MiFi device [source: Verge].