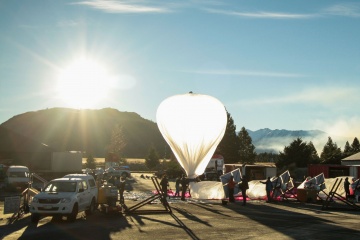 The first layer of Earth's atmosphere is the troposphere, where we live and where most weather occurs. The balloons will float in the next layer up, called the stratosphere. The lower end of the stratosphere starts between 4 and 12 miles (6 and 20 kilometers) above the surface of the planet (lowest at the poles and highest at the equator), and the upper stratosphere ends at around 31 miles (50 kilometers) above the Earth. The Loon balloons will float between 11 and 17 miles (18 and 27 kilometers) up, around twice as high as commercial aviation routes.

In the stratosphere, there's little water vapor, very few clouds and no weather to speak of. It's also colder toward the bottom and hotter toward the top, which prevents the gases from rising, creating a situation where there are relatively stable layers at different altitudes. At these layers, the wind blows in different directions and speeds in predictable ways.

Google has been analyzing historical wind-related data and ongoing future forecasts from the National Oceanic and Atmospheric Administration (NOAA) to develop algorithms that can predict and simulate wind patterns to help with balloon navigation. The balloons will be steered by adjusting the helium to air ratio to raise or lower them to the stratospheric level where the wind is blowing in the direction Google needs them to go. They will be hitching rides on the wind, making them both solar and wind powered in a sense.

Google has developed an operations system they call Mission Control to constantly monitor, track and steer the balloons, and even alert nearby air traffic controllers of their presence when they're ascending to the stratosphere or descending to land. Their navigation software has been improved over time, from sending commands just once a day to every 15 minutes. Mission Control can recalculate the balloon flight paths every minute. The Loon team has also improved their ability to direct the balloons to specific locations, from a few hundred meters initially to a now much more accurate few hundred kilometers. Navigation needs to be automated as much as possible to enable control of thousands of balloons at a time to keep the networks from breaking, but there will still be people using the Mission Control software to keep tabs and control things manually, if need be.

The LTE networking equipment attached to the balloons will work on existing phone companies' cellular spectrums and allow the balloons to communicate directly with cell phones and towers on the ground, eliminating the necessity for installing special ground antennas. Google will form partnerships with local cell companies so people can connect through LTE-enabled mobile devices. Special Loon SIM cards will be necessary to connect to the network.